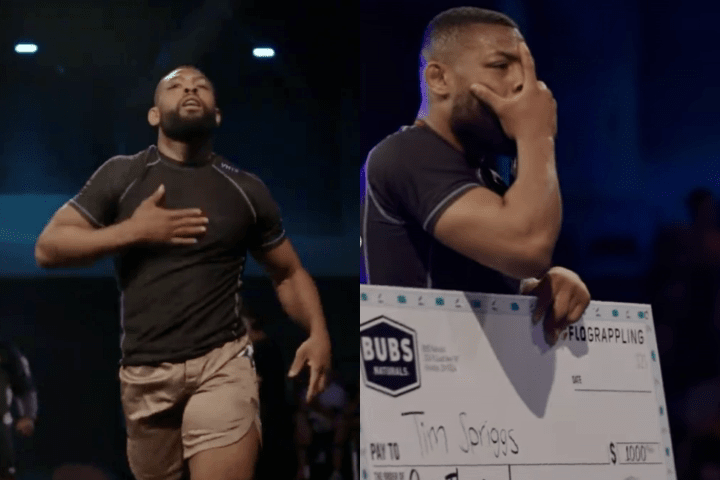 The first finals match of the previous weekend’s Who’s Number One (WNO) Championships was the heavyweight one; featuring a bout between Tim Spriggs and a hugely favored Kaynan Duarte. And, well, the end of the match saw a finish that not a lot of people expected.

Spriggs and Duarte began by wrestling on their feet. Kaynan then pulled guard and set himself into a Single Leg X guard. Tim attempted to escape this leg entanglement, but his opponent wasn’t letting go. Ultimately, Duarte secured a Heel Hook and went for a Calf Slicer finish.
However, despite the odds, Spriggs managed to escape the submission attempt and regain the position on his feet.
Duarte yet again pulled guard, but this time Spriggs started imposing his own guard passing game. He tried to use a Knee Slice pass, but unsuccessfully; and Kaynan returned to his feet for a brief moment, only to pull guard again.

As Kaynan kept Spriggs in Half Guard, Tim used a brief window of opportunity to sit back for a surprising Leg Lock attempt. Duarte attempted to gain a Leg Lock himself, but his opponent already managed to lock up a Heel Hook… Which led to Duarte tapping out at around seven and a half minutes into the bout, with Spriggs being awarded the WNO heavyweight title.