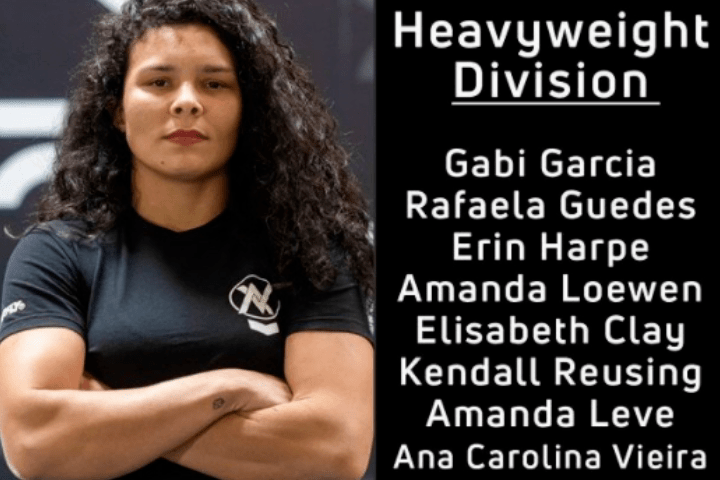 The Who’s Number One (WNO) tournament is scheduled to take place on September 25 and 26. It will feature five brackets of eight grapplers – most of them being the top No Gi athletes in the world.
The championship has now revealed the full bracket for women’s heavyweight division – and it’s a great one! Check it out below:

The first name that comes to prominence is Gabi Garcia – the most accomplished female grappler in history, a probable favorite for winning the division. However, the rest of the bracket is full of other, equally elite grapplers, such as Rafaela Guedes (ATOS) – who is coming off a loss against Erin Harpe; yet another competitor on the bracket.
Of course, there is Ana Carolina Vieira as well. Even though most of her successes are found in three IBJJF Gi World Championships golden medals, she has stepped back onto the No Gi competition scene recently as well – defeating Elisabeth Clay, a fellow WNO competitor, in July at the Road To ADCC event.

The exciting Kendall Reusing and Amanda Leve are on the bracket as well, and so is Amanda Loewen – a longtime Submission Underground (SUG) champion. This will be her WNO debut.