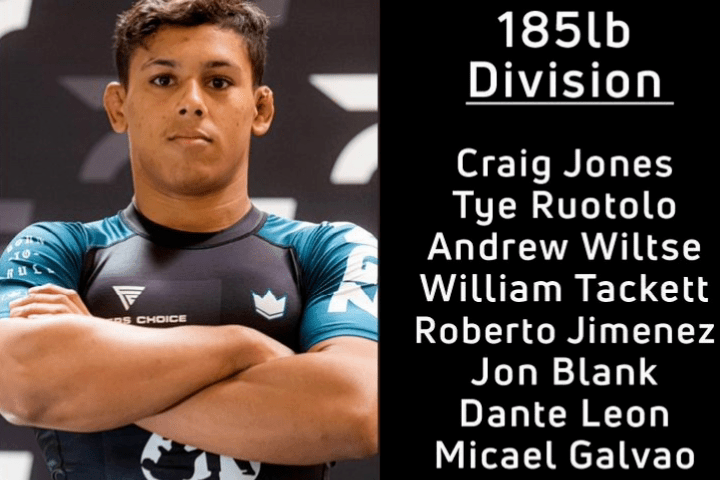 The Who’s Number One (WNO) two-day tournament will take place on September 25 and 26, featuring eight-person brackets. It’s been just recently that the promotion has released the full bracket of the 185-pound division – which is loaded with the biggest names of Brazilian Jiu-Jitsu!

The first athlete that catches the eye is Craig Jones. He’s the one who’s likely to be favored for winning the division, as he’s been dominant the whole year-round; with submission victories against Ronaldo Junior and Luiz Panza, as well as with a decision victory against Tye Ruotolo.
Ruotolo is also going to participate in the 185-pound division. His submission-oriented game is one of the spectators’ favorite, and will fall into the WNO ruleset (submission only) more than well.

The superbly exciting Andrew Wiltse will gain his place on the mats as well, and so will Roberto Jimenez – who has claimed a win against another competitor, Dante Leon. Additionally, Jimenez is coming off a win against Kade Ruotolo, in what has been one of the best matches of 2021.
To add to the overall excitement, Mica Galvao – the young BJJ phenom who has the skills to beat anyone in the division – is featured too. He’s made a boom this year, as he managed to gain wins against John Combs, Oliver Taza, and Pedro Marinho. With that, the fantastic Jon Blank and William Tackett round up this 8-man WNO bracket of grappling greats.