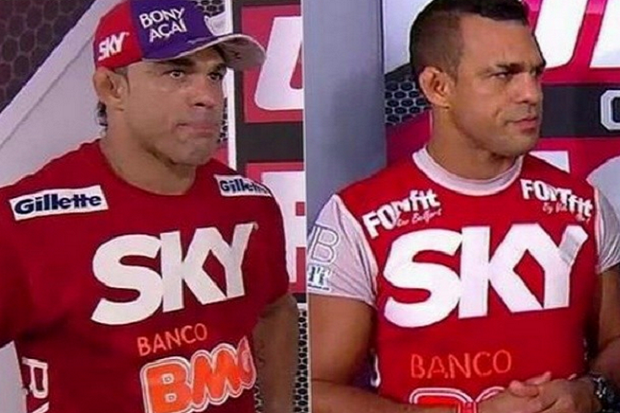 Vitor Belfort became the poster child for Testosterone Replacement Therapy. When TRT was banned from the UFC, many began to wonder how Belfort would perform.

When an image surfaced that appeared to show Belfort notably diminished in size, Weidman took the opportunity to talk a little trash.

Hang on for a second is this what happens when you replace TRT with TNT?

The UFC banning TRT will affect a long list of UFC fighters such as Vitor Belfort, Todd Duffee, Dan Henderson Nate Marquardt, Frank Mir, Shane Roller. Chael Sonnen has already retired as a result of TRT ban and getting a 2 year suspension from  NSAC after being caught twice for PEDs.

But what exactly will happen to these athletes when they stop TRT?  In an eye-opening new interview with Fightland, endocrinologist Dr. Neil Goodman shared his insight about fighters who get on TRT, and the horrible effects when they get off it. Some excerpts are below:

“I’ve been involved with professional athletes who’ve been referred to me by their agents to get them off steroids because they knew they were on them and going to get caught, so I’m very familiar with this. I think this is a problem in all of competitive sports in that a lot of these guys begin in gyms, they’re taking all kinds of anabolic steroids. Then they go off and go to the doctor, and their testosterone’s low. The original cause of low testosterone is that most of these guys in competitive sports are taking excessively high doses of almost anything they can get their hands on.

If a young guy comes in with low testosterone, my first thought is this guy’s been taking steroids. And I’m usually right.

Let’s take a guy that’s legitimately stopping testosterone. He goes to his doctor and says, “Look, I really need it because there’s something wrong with my testes,” he goes to a doctor, the doctor does blood [work], and sure enough, the guy’s testosterone is in the toilet because he’s been on it. When you come off of it, your testes are not working. And it may be months or years, or never, until they ever start making testosterone.

If the guy’s honest and he’s going to start working with someone like myself, we’re going to try the best we can to get him to normal testosterone levels. I’ll say to him, “Okay, what are you taking?” He’s honest with me and says he’s just taking injectable testosterone. I’ll say, “Stop it.” In a couple of weeks, I’ll do some blood work and see what his baseline level is after he comes off the stuff. Then I’ll put him on some gel that’s going to give him a steady amount of testosterone, bring his level up to give him a “normal” level of testosterone that he can stay on, let him have a chance to recover, and see what we can do after a few months.

Some guys, I can get their testes to start working again. We use a drug called Clomiphene, and for those guys, it wakes up the brain computer that runs the show because it’s been shut down. If I have a shot at them coming back to normal with tapering down their gel and keeping them on Clomiphene, over about three or six months or more, I’ll start to see their testosterone production come back…

Their muscle strength will decline. They’ll put on some fat weight. Their moods will become depressive. They’ll have fatigue. It’ll be horrible — I feel bad for them. It’s going to be misery…I’m not saying all guys are going to have serious problems. It depends on what they’ve been on, how much they’ve been taking, what other drugs they’ve been on. It’s a mixed bag.