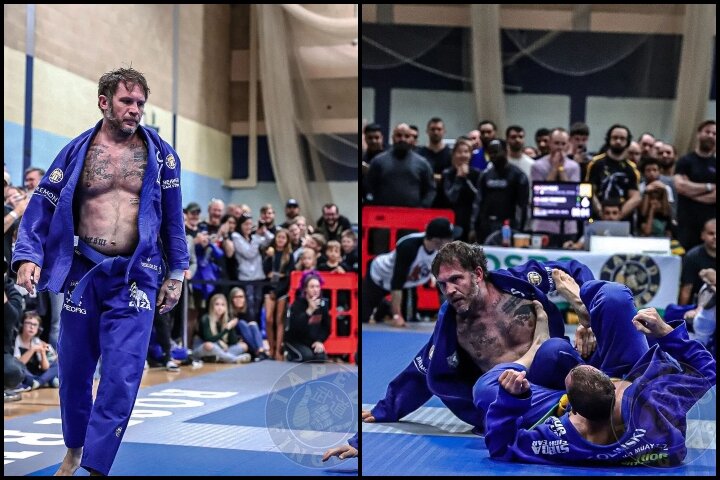 The BJJ community has lately been talking a lot about Tom Hardy, the world-famous actor; as he’s started appearing in gi tournaments – and winning them all.
His most recent tournament took place last weekend in England, at the 2022 UMAC Milton Keynes BJJ Open. There, he competed in the blue belt Masters 3 division, at 82.3kg.

His division had 5 competitors in total, with three other competitors getting a “bye” during the bracket draws. Therefore, they were automatically slotted for the semifinals; which meant that they would only need two wins to earn the gold. Whereas Hardy needed three wins.
However, that didn’t seem to bother him. He beat all of his three opponents with relative ease – as he didn’t have a single point scored on him and by winning all three matches via submission.

Here are the videos of his last two matches, the semifinals and the finals. In the semis, he pulled off a Bow & Arrow Choke… And in the finals, he got the Straight Ankle Lock:

The famous actor has said that BJJ’s been of great importance to his mental health:

Simple training, for me (as a hobby and a private love ) has been fundamentally key to further develop a deeper sense of inner resilience, calm and well being.
I can’t stress the importance it has had and the impact on my life and my fellow team mates.