[Watch] Referee Stands Up Fight During A Buggy Choke Attempt 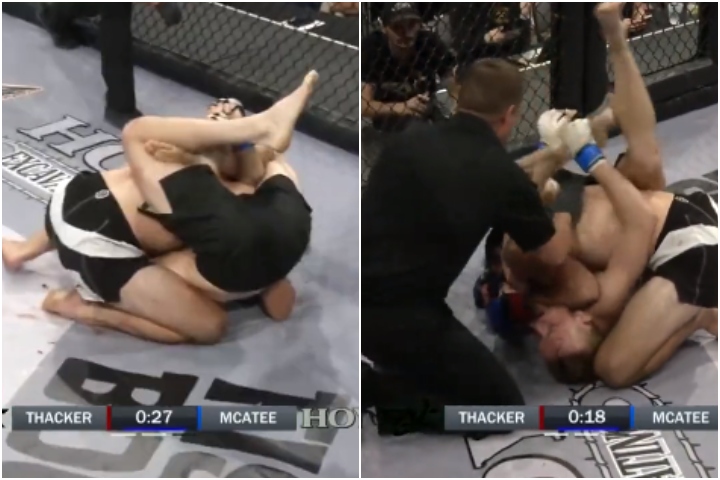 “Stand ‘em up!” Yeah, you’re probably familiar with that oh-so-annoying chant. It’s been a staple in a part of the MMA community for quite a while, yelled out when they get bored from watching fighters grapple.
And yup, it has been getting on BJJ athletes’ nerves for a long time, too. But it’s rarely ever been a problem for the actual athlete(s). Nor for the referee.

Well, that hasn’t been the case at the recent Fighting Alliance Championship (FAC) event. At FAC 15, Chandler McAtee made his debut against Justin Thacker and applied a Buggy Choke submission.
He began adjusting the technique, making the squeeze tighter… And then – the referee chose to stand the fight up!

Yup, you’ve read that correctly. The referee probably wasn’t acquainted with the Buggy Choke technique and perceived it as “stalling”; when, in fact, some time had to pass before the submission would take effect.
Watch it take place on the video below:

Ref just stood up the fight during a buggy choke attempt. Come on #FAC15 pic.twitter.com/bY5TaDI8tI

The commentators themselves couldn’t believe what was happening. The confusion from the crowd filled the room, too.
Nevertheless, McAtee secured the win in the third round: