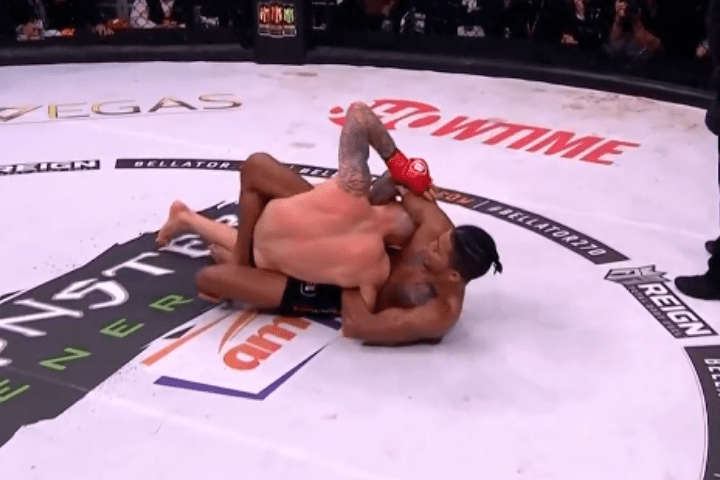 Patchy Mix and James Gallagher went head-to-head in their Bellator 270 co-main event… And Brazilian Jiu-Jitsu fans around the world have had a field day; as it’s been, in the words of the Bellator commentator, a true “battle of Guillotines”.
It was a full-on grappling showdown. Here’s how it went.

At the very opening of the first round, Mix countered Gallagher’s Double Leg attempt with a Guillotine. However, Gallagher took his time with freeing his neck before he took the fight down to the canvas… Where he locked up a Guillotine Choke himself!
However, Mix escaped it quite easily. As the match progressed, the two athletes stood back up and in the last 15 seconds, Gallagher secured a takedown – even though Mix reversed position and ended up in top position himself.

Then, in the second round (and after Mix recovered from a groin kick), the fighters exchanged more punches than it was the case previously. However, Mix then closed the distance with a clinch, after which Gallagher went for yet another Guillotine attempt. It seemed that Mix was in trouble, but he escaped the attempt and found himself in top position once more.
Gallagher couldn’t escape as Mix held the position quite well throughout the round. In the end, he moved to a Crucifix position from which he delivered some quality strikes.

It was in the third round that Gallagher repeated his first-round mistake. He went for a takedown, but Mix successfully stuffed it and locked up an extremely tight Guillotine, jumping it. Then, he rolled over on top of Gallagher – who could do nothing else other than tap out.
Check out the submission finish below:

🔥 @TeamMixMMA with a moment of submission brilliance!💪