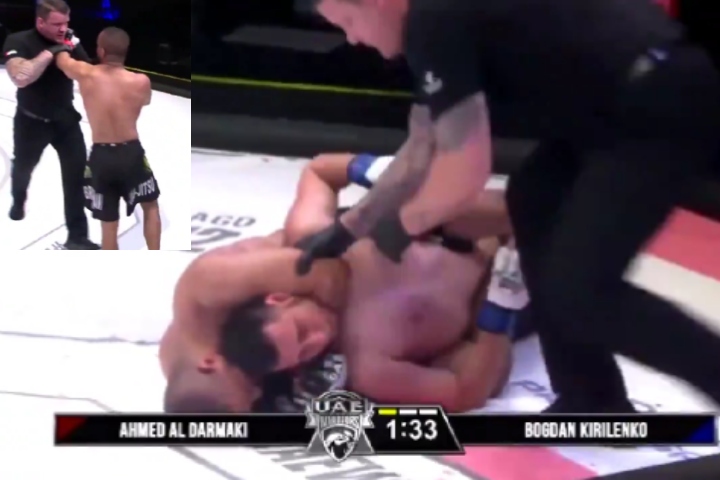 Ahmad Al Darmaki is an MMA athlete who fought on one of the UAE Warriors 12 cards, against Bogdan Kirilenko. He mounted Kirilenko, delivering some ground-and-pound, due to which his opponent turned his stomach towards the floor – and Al Darmaki set the Rear Naked Choke in. Kirilenko tapped out.
However, Al Darmaki refused to release the choke. Marc Goddard, the famous UFC referee, had to forcefully “peel” it off.

Then, Al Darmaki got into a confrontation with Goddard, pushing him away. As a consequence, he was disqualified and then also banned from competing at UAE Warriors.
Watch his unsportsmanlike behavior on the video below:

Ahmad Al Darmaki was just DQ’d after he refused to release an RNC against Bogdan Kirilenko. Things got physical between him and ref Marc Goddard.#UAEWarriors12 pic.twitter.com/XF1azA1Jzs

Some time after the entire ordeal, Al Darmaki released a video statement in which he explained his actions. He emphasized that he didn’t let go of the Rear Naked Choke simply because he didn’t see that Kirilenko was tapping on the canvas.
And as far as the confrontation with the referee is concerned, he said that Goddard was swearing him out – and that triggered him to act in the way he did. Nevertheless, he admitted that he was wrong and that he should not have acted out, apologizing to everyone.