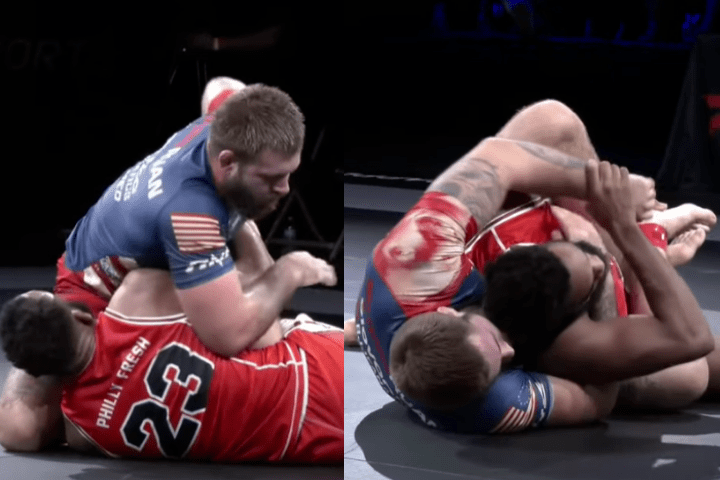 Gordon Ryan made his return to competition on October 21, with a 15-minute exhibition match against Philip Rowe at Who’s Number One (WNO). The pace of the match had a light-hearted nature to it, with Ryan even throwing a couple of mock punches towards the end. Nevertheless, he managed to submit Rowe for a total of 4 times.
His first submission was a Heel Hook from the Cross Ashi position, just 45 seconds into the match. Then, he secured an Arm-In Guillotine Choke after around 5 minutes. Afterwards, in the final 5 minutes of the bout, he successfully applied a variation of a Front Triangle Choke and of a Side Triangle Choke.

However, Ryan didn’t focus solely on submissions. Rather, he played around with his defense as well, especially back escapes:

I wanted to do a little bit more back escape stuff because that’s what I just released the DVD on. But he only took my back once, so I just did pin escapes and some submission escapes, Armbar escapes, and Side Control and Mount stuff. That’s coming out in the future.

Rowe, who is a UFC welterweight athlete, wasn’t sore about losing – and praised the BJJ community shortly after the match:

UFC’s a byproduct of me training Jiu-Jitsu, so I respect everybody.
If they’re gonna call me to show up, of course, I’m gonna show up every time.

Now you can watch the entire Gordon Ryan vs. Philip Rowe match on the video below: