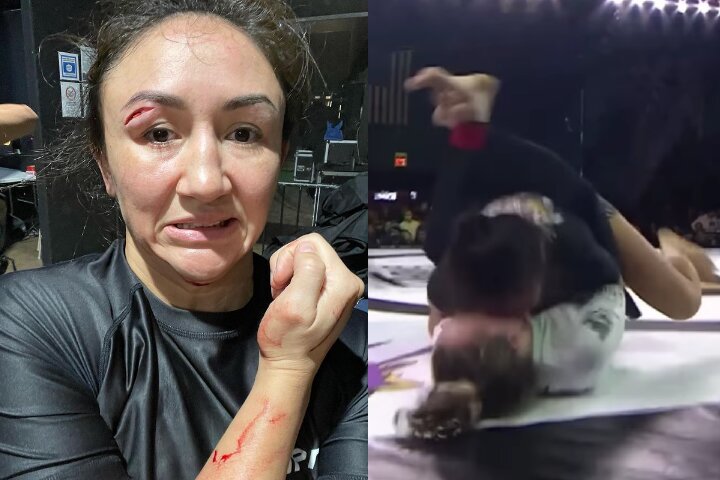 The Fury Grappling 3 match between Carla Esparza and Danielle Kelly didn’t end as either of the two athletes nor the grappling community had hoped.
Stepping in to replace Rose Namajunas in the main event against Kelly, Esparza did it on short notice. As she’s the top contender against Namajunas for the UFC strawweight title at the moment, everyone expected an exciting bout. However, the match was stopped due to doctor’s decision, as Esparza suffered a nasty cut over her right eye.

Namely, the injury took place while she was inside Kelly’s Closed Guard. She tried to defend the position by lifting her up and slamming her down to the mats. However, the impact resulted with Esparza’s head colliding with Kelly’s.
The referee paused the match as Carla Esparza had blood pouring out above her right eye. Then, the referee decided to stop the match altogether, as the cut was too deep.

Check out how it happened below:

Esparza was sorry that the match ended the way it did:

Sorry guys, accidental head butt on a slam led to a cut and a stop in the match. In good spirits! Just gotta get a couple stitches.

Kelly is hoping for a rematch in the future herself:

So I just want to say I wish @carlaesparza1 a speedy recovery. Not me or her were expecting that and maybe a rematch in the future if it doesn’t get between schedules.
Honestly I was confused and a lot of adrenaline was going through me. I was just really excited to be apart of a huge event with everyone watching. I’m also just nerding out this mark on my face lol. Thank you to everyone for the support and my sponsors.