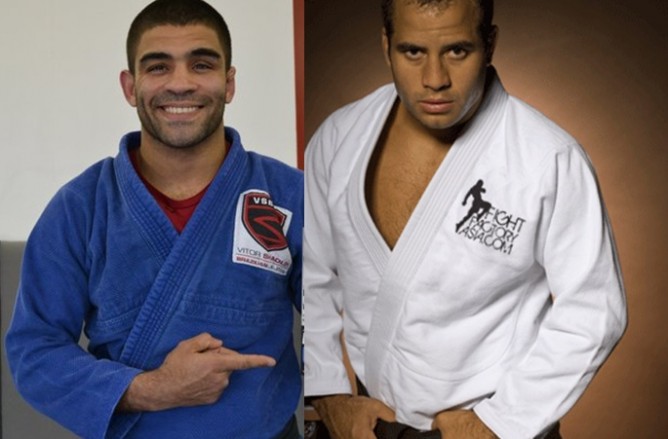 2 BJJ legends want to dig up their old rivalry and put it on the line in a Metamoris 3 submission only superfight:

Leo Vieira: “I would like to face Shaolin. He was my biggest rival on the mat and we always did exciting fights Would be nice that we can face each other again. I like Vitor. I have so much respect, but fight against him back in the time makes me improve my game and my style every single competition.”

” Years ago, I would have to say Leo was my toughest opponent. I never fought someone who challenged me so much in my game. I always believed in my life I had good speed and endurance, but against Leo he always put everything into check for me. After my fight against him where I lost, I rushed back to school after the fight and tried to figure out why I lost. Always with Leo was a good fight! It was always decided by little things. I think one of the best fights we did was in the no gi at the Pro Am I think in 2000. It was an amazing fight, I think we fought around 15 minutes.It was a good back and fourth fight. Leo had great take downs and the match was overall very slippery. For me it would be a pleasure to go out and train for about 3-4 months to get into great shape to fight against Leo. To have a quick pace fight in no gi that he and I both love. It would be great to have it in a great show than oppose to a tournament to turn it into an event. Something similar to Metamoris with a longer time limit.“

“I really, really enjoy the idea of facing him in a no gi fight again. It makes me excited once again with all the training and all the focus to face tough opponents. To come back in shape and fight him again.”

Here is a old match of Shaolin Vs Leonzinho at the Sao Paulo Challenge: