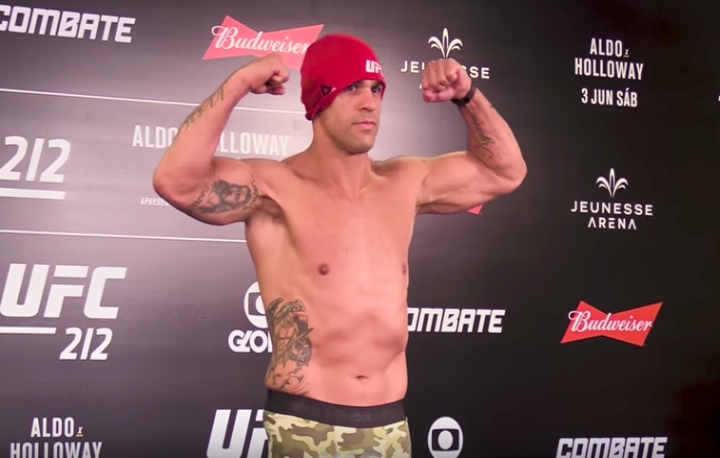 Vitor Belfort is an mma legend. The 40 year old fighter from Rio De Janeiro Brazil went through many ups and downs.

The Phenom will get to make his final appearance in the home town of Rio De Janeiro at UFC 212 scheduled for this weekend.

The Phenom prepared for the fight by training in Tristar Gym in Montreal which houses former UFC champions such as Georges St-Pierre, Rory MacDonald. Joseph Duffy and unders under the watchful eye of Firas Zahabi.

In fact it was even confirmed that Firas Zahabi will be cornering Belfort in his final UFC bout.

UFC 212 will be 25th fight of Belfort’s career and last in current contract. He said he will be retiring but as of right now he’s not 100 percent committed to retiring from competing for good.

“I went to Canada with Tristar, a great camp. Something stirred in me,” Vitor told MMA Fighting. “They stir something in me. I feel really motivated.”

Vitor Belfort brought his dog as he made weight for the UFC 212 weigh-ins Friday morning in Rio de Janeiro, Brazil:

Vitor Belfort confirms Pending Retirement: ‘My body is not the same anymore’