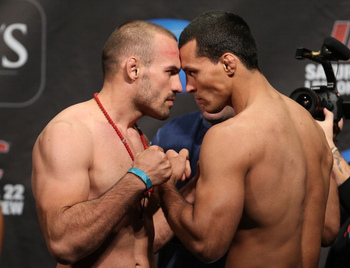 Jiu-Jitsu ace Vinny Magalhaes had an impressive win over Croatia’s Igor Pokrajac at UFC 152, dispatching him with a second round armbar. The Jiu-Jitsu World Champion has this say about his Croatian opponent in an interview with http://www.bloodyelbow.com/

I’m not going to be worrying about what he’s supposed to be good at. People call him a striker because he has a few knockouts. His most impressive one is over Krzysztof Soszynski, and I don’t want to take anything away from that, but Krzys was coming off an injury. If you look at his fights before the UFC, he was fighting guys that were like 0-7 or 1-10. Those are the kind of guys he was knocking out. If you’re knocking out guys with losing records, it’s not super impressive. He’s not beating world champions. Given that most people call him this striker/wrestler, I’m just not super impressed with his striking or his wrestling.”