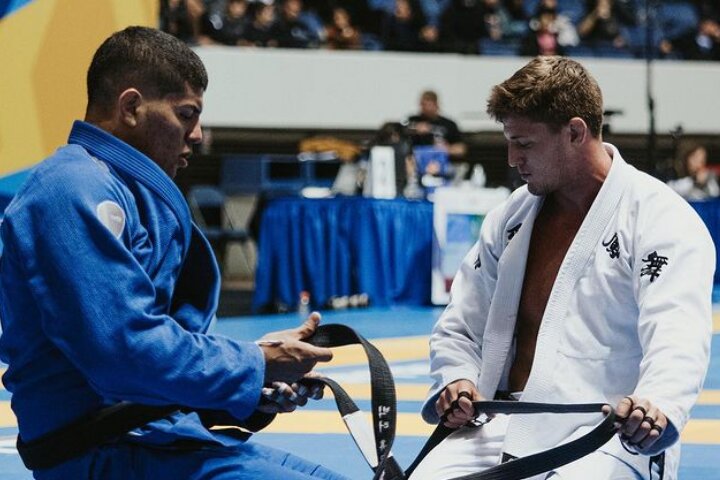 Even though it was one of the most expected bouts of the entire year, the 2021 IBJJF Worlds absolute final match between Felipe Pena and Nicholas Meregali did not happen; due to Meregali’s earlier disqualification, when he showed a middle finger during his ultra-heavyweight semifinal match against Victor Hugo.
After the DQ, Meregali released a statement, claiming within it that Max Gimenis – who lost to Hugo in the ultra-heavyweight finals – was robbed of his title, as Hugo should not have competed in the finals.

The reason? Meregali beat him during their semifinal match. Therefore, Victor Hugo decided to take it to social media and call out his opponent, even offering him a fight in an MMA bout:

You’re aware of your public and you know very well what you did and that being said, you should’ve been DQ from out match RIGHT WAY according to the RULES, if there are rules the organization (@ibjjf) it’s there to exercise them and your action it was considered a serious one. I’m not there to judge or do anything less than fight when I’m asked to (and that’s what I did in the finals).
So if you feel like doing a FIGHT in a environment where are less or no RULES, which would be a cage I am all in for that. In that same situation you would be allowed to behave however you feel and hardly anything wouldn’t be allowed. As far as Jiu-Jitsu under the federation of @ibjjf you did beat me fair and square during absolute; but in our division you lost by DQ and have no right or whatsoever on decide who should be the winner of the ultra-heavy weight division.

That being said, I am the 2021 Ultra heavy world champion; even if you, your fans or other people agree or not. I never asked for that, you did that yourself and @ibjjf was there to exercise their job as a SERIOUS federation.