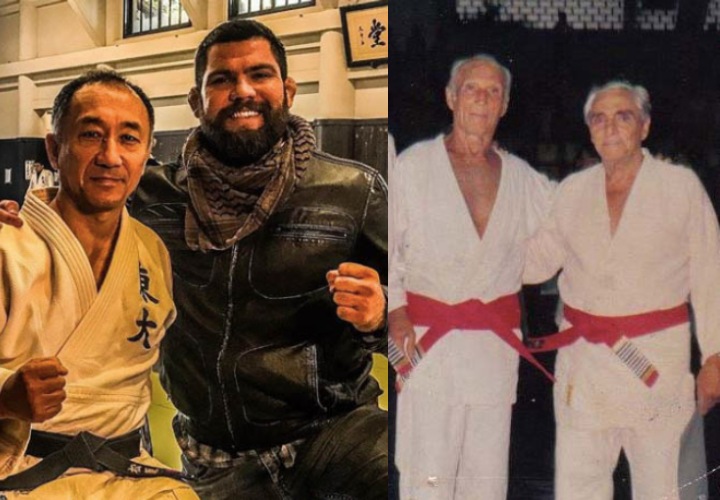 Do you remember your first steps? One day – be it just a month ago, a couple of decades ago or something in between – you found out about Brazilian Jiu Jitsu. You saw it on Youtube, your blue belt friend invited you to come and try it out, or you simply wanted to start training something which would not just get you fit, but build your confidence and give you a sense of belonging. The rest is, as they say, history.

YOUR FIRST STEPS, YOUR LIFESTYLE…

And indeed it is! You’ve stepped on the mats nervously at first; but, along the way, your confidence grew. You became better and better in the techniques, in transitions and positions; you started shedding fat and you’ve built up way more endurance than you ever thought possible. But, most importantly – you slowly fell in love with BJJ.

Bit by bit, Jiu Jitsu stopped being „just a sport“ for you. Heck, there are a million other sports you could have trained! That you, perhaps, might have already trained back in the day when you were younger, or that you are indulging in every now and then with your friends, to this day…
But none of them could ever come close to BJJ. None of them could ever compare with the feeling of walking on those mats, of hitting a submission you have always had trouble with in live rolling, of catching your breath during that short breaks between rounds. Of being surrounded with your fellow teammates and sharing your best and worst moments with them; of travelling to some far-off places where you don’t know anyone nor anything – except that one BJJ academy where you always feel as if you’re at home.

So, it’s no wonder that the saying: „It’s not just a sport, it’s a lifestyle“, became 100% true for you. BJJ is now a part of who you are.
For that reason, if nothing else, it’s of greatest importance to get to know, to learn and to understand the roots and history of Brazilian Jiu Jitsu.

… AND BJJ HISTORY IN AMAZING DETAIL: CLOSED GUARD: THE MOVIE

Simply said – if you understand where your beloved sport comes from, how it came to be and who its most important figures are – you’ll be able to better understand yourself. And to fall in love with BJJ even more! It’s a win-win situation on so many levels, right?

Well, then we have amazing news for you: former ADCC and IBJJF World Champion Robert Drysdale has just released a teaser for his long-anticipated Closed Guard: The Movie, which will likely premiere in August 2020!
The purpose behind the movie, as said in the movie crew’s own words, is to provide you with a lens into the real, ubiased history of BJJ as accurately as possible. Approaching the task without any bias, the Closed Guard crew has a goal of pointing out the false information that has been circling around in the Jiu Jitsu community about BJJ history for a while – and to tell the true side of it, through the stories of many fascinating characters and events which have shaped Jiu Jitsu into the magnificent sport that it is today.

In short: you will soon have a fantastic opportunity to watch a great documentary! One which will tell you the complete story of Brazilian Jiu Jitsu’s roots, from just about every angle that you can think of. So, don’t miss it and be sure to watch it – and you’ll know more not only about your own, but also about your beloved sport’s first steps.

Watch the teaser for Closed Guard: The Movie below:

The term “Know your roots” gets thrown around a lot in BJJ circles, but we don’t know our roots do we? The goal of this film was always to tell the history of BJJ as accurately as possible and without any bias. A difficult task, given the length and complexity of the history, the number of never introduced characters, our goal to correct history (which can’t be done without mentioning what is wrong with it in the first place) made this film a colossal task. We are at version number 6 of the script and it is still constantly changing as we learn more about this history. From Commodore Perry’s “gun-boat diplomacy” to the first challenge of East versus West between Sumo Wrestlers and American Sailors, to the influence of Western Philosophy and Wrestling into Kano’s creation of Kodokan Judo, to the Russo-Japanese War, Japanese immigration, the original Jiu-Jitsu “Craze” of the early 20th century, the rubber-boom in the Amazon, to a group of Japanese adventurers, to scions of Scottish descent and their “patrician ethos” and the ensuing rivalries between Judo, Capoeira, Boxing, Greco-Roman and Catch would allow time and space for the specialization of an increasingly neglected aspect of Olympic Judo and that would later be called “Brazilian Jiu-Jitsu” (but that really should be called “Brazilian Judo”). The byproduct of all these loosely related events is the development of a different version of this Olympic Judo that witnessed in parallel the evolution of “Vale-Tudo” (later re-branded MMA to an Anglicized audience). The film has no release date as of now since we are rewriting the introduction given our current state (apparently never ending) of learning our roots. But we anticipate a premiere during the Masters Worlds in August 2020 (assuming the World is back on its feet by then). Who’s ready for some BJJ history? #Bjj #jiujitsu #acamma #grappling #history #documentary #film #nogi #gi #judo #fight #mma #ufc #closedguard