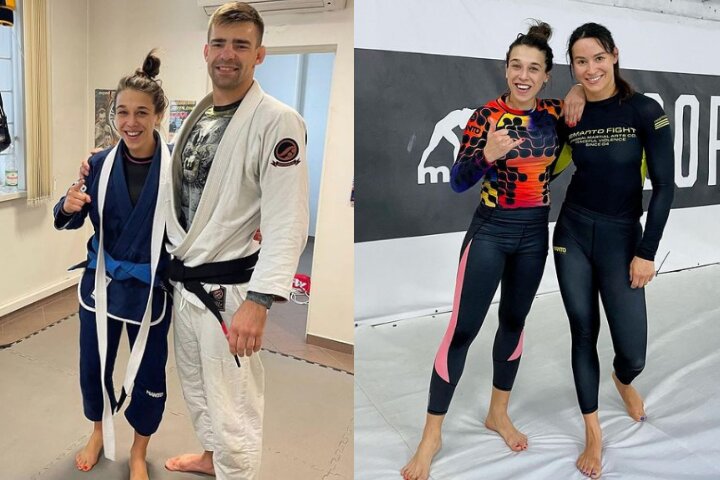 Joanna Jedrzejczyk is one of the best strawweight MMA fighters in history. She is the UFC’s former division champion, as well as a multiple time Muay Thai world champion.
She’s known for her striking skills, but she’s been working hard on her grappling as well… As she’s now a Brazilian Jiu-Jitsu blue belt!

Jedrzejczyk shared the good news on her social media:

You’ve made my day Artur @pistol_bjj Thanks for pushing me into wearing the GI and training. I didn’t expect blue belt promotion. Thank You.

She also commented on her current UFC ranking and her desire to fight anyone, regardless of their belt color or rankings. Jedrzejczyk hasn’t fought since UFC 248 and is now ranked as #5 in the UFC:

Actually a few days ago I wanted to post about the rankings. I’m super happy that I went up in the UFC rankings- Women’s P4P #5 and Strawweight #2. There’s lots of rumors about my fighting career, retirement and that I shouldn’t be in the rankings because I haven’t fought for more than 19 months.
I’m super happy and proud of myself being very high in the rankings but rankings don’t fight. I don’t care who I’ll be fighting. No 10, 5, 1, white, blue, black or pink belt. The most important thing is how dedicated, motivated, passionate and disciplined I’m.

My legacy speaks for me. So don’t be surprised. Can’t wait to put on hell of a fight for my real ones, for all of ya. For so many. Still want to have a pink belt one day.

One more thing Girls. Do not complain about me being high in the rankings. I did my part already but I know there is much more to come. Take my place. I don’t care. I know my value and I know who I am. ALWAYS UFC SOLDIER.