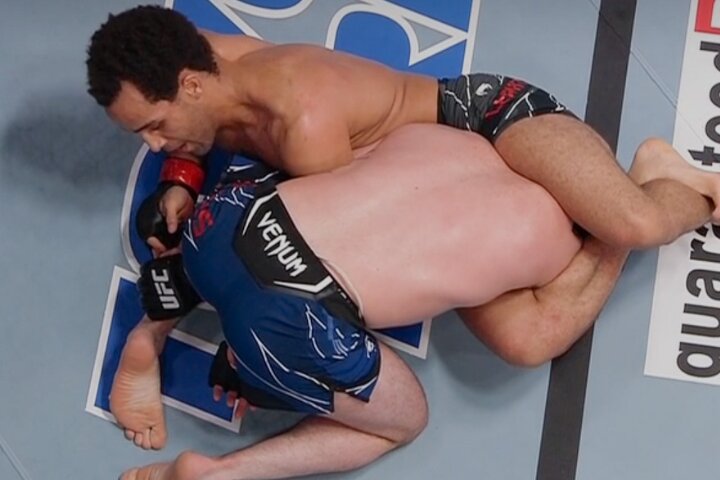 UFC Vegas 45 didn’t disappoint – not in terms of excitement, nor in terms of grappling display. But the match that was most exciting grappling/Brazilian Jiu-Jitsu wise was definitely the one between Jordan Leavitt and Matt Sayles; where Leavitt surprised Sayles with a technique the latter didn’t expect, and tapped him out with an Inverted Triangle Choke at a bit over 2 minutes in the second round.

Jordan Leavitt was showing off his BJJ skills earlier in the fight as well. For instance, as he was essentially rolling with Sayles, he almost got a Darce Choke. However, he didn’t manage to trap his opponent’s legs, so Sayles rolled out of danger in quick fashion.
Also, Leavitt was setting up takedowns and chokes throughout the bout, but Sayles managed to keep the fight standing and out of danger for the most part.

As the second round came about, Sayles grabbed Leavitt’s leg and went for the takedown himself. However, he found himself in trouble, as Leavitt set up an Inverted Triangle Choke (the third successful one in UFC history) and got the tap.
You may watch the highlights of the match below: