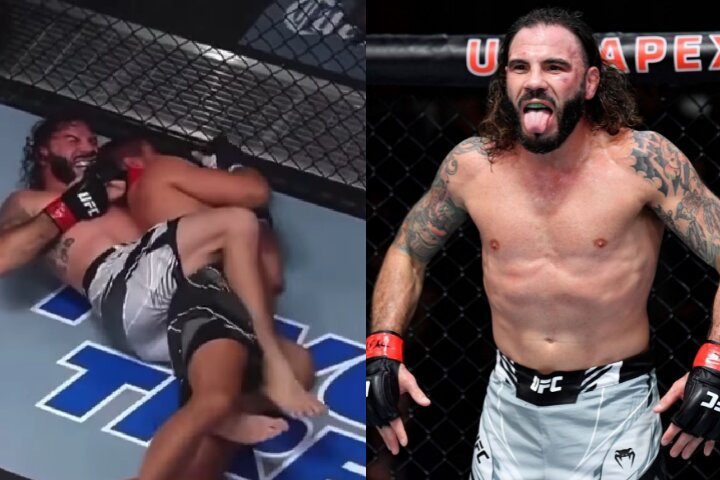 The UFC Vegas 44 saw some fantastic fights, among which were two spectacular submission finishes: Claudio Puelles’ Kneebar against Chris Gruetzemacher and Leonardo Santos’s loss to Clay Guida via Rear Naked Choke.
But what makes Guida’s win that much more impressive is that he was losing by a lot before he got the submission… It was 46-0 in significant strikes for Santos!

The first round didn’t start too well for Guida. Santos delivered a heavy body kick, which left Guida in serious trouble; after which Santos followed up with a number of heavy strikes and was seemingly close to getting the stoppage win. However, Guida survived; and then reengaged his opponent.
Then, in the second round, Guida managed to get a takedown and take Silva’s back. From there, he set up a vicious Rear Naked Choke and got the tap.

After the win, Clay Guida praised his wrestling:

One word: wrestling, baby. Wrestling got us here, wrestling’s going to keep us here.
He had me hurt real, real bad. We were able to get the submission against a multiple time world champ black belt. We needed that one.

A number of UFC athletes and people involved in martial arts were impressed with Guida’s performance:

Midwest Blue Collar Heart !! @clayguida you are the man!!

Omg yes Clay Guida gets the sub. Amazing comeback! He’s in the Hall of Fame for a reason! #UFCVegas44

Guida is a savage