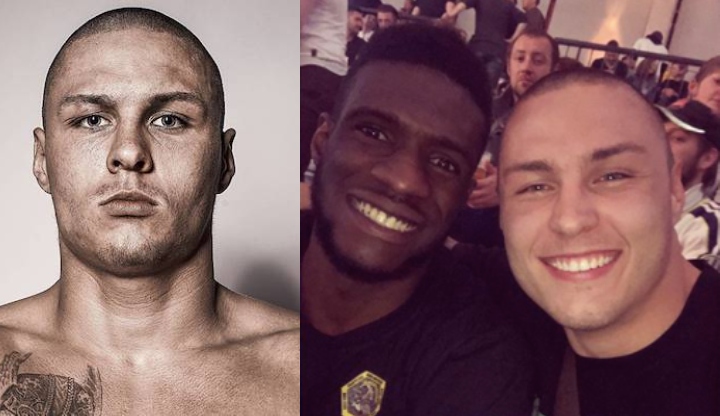 The UFC has just announced that they has released German fighter Timo Feucht according to MMA Fighting, after they discovered Feucht’s alleged past ties to a Neo-Nazi group.

The UFC also rescinded a contract offer for Feucht.

Timo Feucht reportedly was a member of a right wing hooligan group & Neo-Nazi organization, and participated in an attack on the Connewitz district in Leipzig, Germany in January of 2016.

According to Bell Tower News the Neo-Nazi group where Feucht was a member used “explosive-like pyrotechnics, pepper spray and other weapons and smashed window panes from shops, restaurants and pubs, destroyed cars and attacked people who were present in the district at the time of the crime. Afterwards, axes and knives were also secured around the crime scene.”

MMA organization Brave CF also rescinded a contract offer to Feucht in 2017 for the same reason. Feucht, trains alongside UFC fighters Alexander Gustafsson and Ilir Latifi, among others.

Feucht reacted by releasing a statement talking about how the birth of his child and growing up, made him turn his life around for the better.

“There was a time in my life when I wasn’t the focused athlete and dad that I am now. Yes, I did things in my past that I am not proud of. I was a fanatic football fan and I kicked over the traces. But there were moments that have led me to reconsider who I wanted to be in life.

At the beginning of 2018, I received the biggest gift that can happen to any human being when my son Arthur was born. I felt what it was like to have responsibility for another tiny human. I realized that if not before, now was the time that I had to turn my life around by 180 degrees. I want a good future for my son and our family.

This was the time I also started training at Allstars in Sweden. It is a big international gym with athletes from every nationality and walk of life. My friend and coach Selman Berisha saw something with me and picked me to become one of UFC contender Alex Gustafsson’s main training partners.

Through my development as an athlete, I qualified first for the Contender Series and now I’ve been given the opportunity to be part of this unique UFC Fight Island experience. What makes me sad is that it is because of things I did when I was 19 years old that I should lose the dream of my life even though I have long moved on from what was in the past.

I clearly would like to state that I never had any extreme political opinion, but I was a teenager who was young and dumb. Now, I have an Arabic Muslim family member that I am very close with and I train with people from all religions and walks of life. I have an international coaching staff made of Albanians, Brazilians, Russians and Swedes.

There is just one thing that I’m asking for: Please don’t judge me based on things that happened almost five years ago. I was immature and hanging with the wrong crowd. Please see what I have sacrificed to make it here. Please see the man I have become. I discovered Martial Arts and that has saved my life. The sport has led me onto the right path. I want nothing more than becoming a role model for young kids who have had to go through the same that I did.”