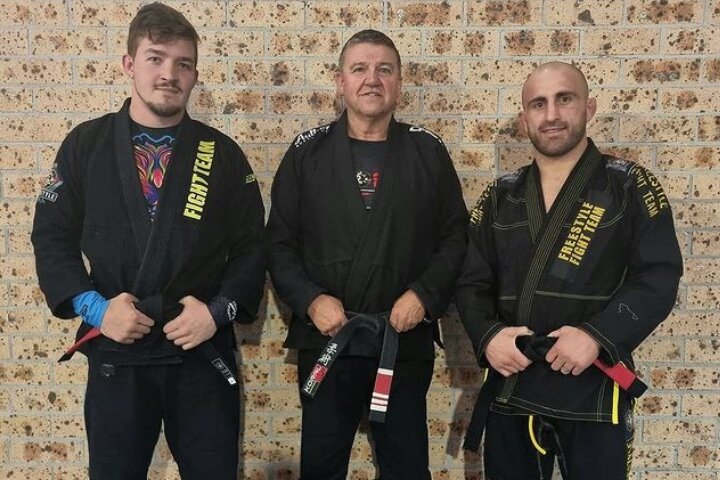 The first thing that probably comes to your mind in regards to Alexander Volkanovski and BJJ probably aren’t his submissions; but his fight against Brian Ortega.
Namely, in his most recent UFC fight, Ortega – who is well-known for his Jiu-Jitsu – caught him in a mounted Guillotine Choke. A lot of people would have tapped from there, but not Volkanovski. He pushed through it, escaped it, and did so again against a deep Triangle Choke that Ortega followed up with.

Since he made his professional MMA debut (in 2012), Volkanovski lost just once and is unbeaten in the UFC. He sports a 10-fight winning streak and mostly wins thanks to his striking skillset; but he also has three submission wins to his name.
But, hold up… Coming back to his escape from Ortega’s Guillotine – how did he do that? Here’s a reminder of what it looked like:

Ortega drops Volkanovski and JUMPS ON THE NECK! #UFC266 pic.twitter.com/cHV7MEuIBw

After the fight, Volkanovski explained what happened and how he managed to push through:

It was tight, it was deep. The space I was trying to make… I usually make that space before he’s anywhere near that deep. But credit to him and how quickly he can wrap up the neck and legs, suck his hips right in on your belly. The grips he has, the arch he’s got, the hips are in, the legs where they are positioned and locking my arms…
I was trying to make space, obviously push on his hips, push on his hand to make a bit of space. Especially once I realized that I couldn’t get the hips up, I needed to make a little bit of space by pulling on the arm. I think that was probably the last little bit that held me.

However, things started getting blurry for him rather quickly:

I felt it, it went from almost going different colors and slowing down to like, sh*t this blood choke’s deep. And I’m going to be honest, I could sit here and be like: “Ahh, I was never in trouble”, but that’s not me, I’ve got to be real here. It was close, and it was like: “Oh sh*t, things are starting to change, this must mean that I’m close to going out.”
So that just made me think fu*k this, I’m doing something.” So I ended up pulling on that arm and shifting it, I made a little bit of space and then everything cleared up.