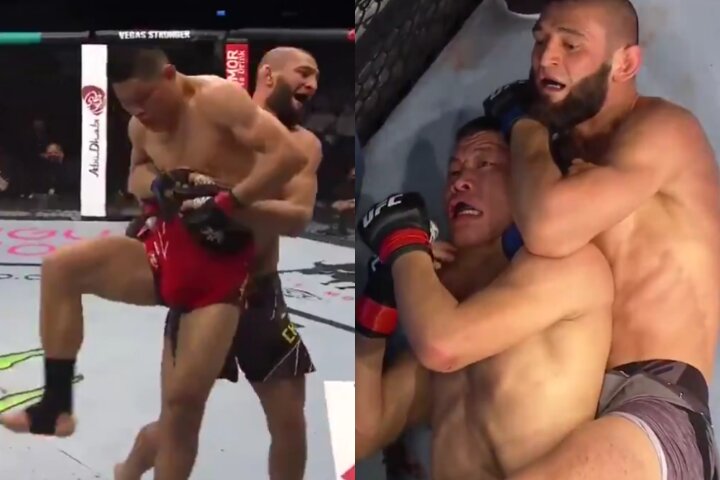 UFC 267 was full of submission finishes! And such was the case for the welterweight battle between Khamzat Chimaev and Li Jingliang, who went against each other in a main card match; where Chimaev put his opponent to sleep with a Rear Naked Choke.

Chimaev was quick to exhibit dominance over Jingliang. He went in for a Double Leg, ducked under him, and then took his back. To make matters even more entertaining, he then carried Jingliang all the way to the angle where Dana White was sitting. There, he spoke to White for a brief moment, and then slammed his opponent down.
He then took Jingliang’s back and locked in a Rear Naked Choke immediately. However, his opponent initially defended by peeling Chimaev’s hand away; which resulted with some heavy ground-and-pound.

Chimaev then set his Rear Naked Choke again, this time successfully. Jingliang refused to tap out and went to sleep.
After the fight, Chimaev was asked what he was saying to the UFC’s president during the bout. He explained:

I said: “Dana, I am the king here!” I could’ve taken him down earlier, but I wanna talk to Dana White, he wasn’t watching the fight. He was on his phone or something. Brother, don’t miss my fights. Don’t look at your phone.

Check out the highlights from the match below: