TV Chef Anthony Bourdain After His First Jiu-Jitsu Training Session: “Once I Got Your Back & My Hooks In, You’re Screwed.” 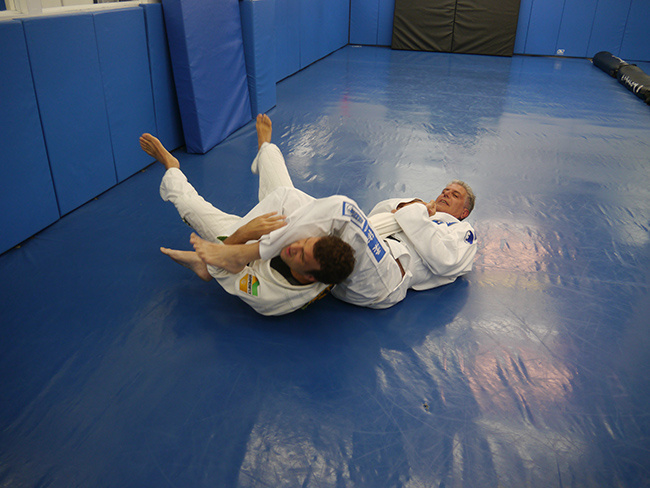 Anthony Bourdain is an American chef, author and television personality. He is the host of Travel Channel’s culinary and cultural adventure programs Anthony Bourdain: No Reservations . Anthony’s wife Ottavia is a rising star on the Brazilian jiu jitsu circuit. She trains at Renzo Gracie academy in New York. She is a blue belt and her recent competition matches and her dedication to hard training have made her into very promising prospect. She actually managed to get her husband to start trainining Jiu-Jitsu with the Gracies, here is an interview she did for fightland.vice.com of her own husband after his first training session: 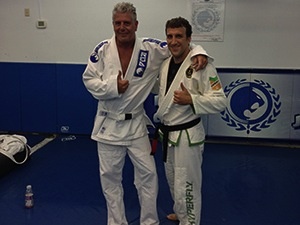 “The real challenge was convincing my husband, Anthony, to do it. I’d been trying relentlessly since I started practicing, but he kept giving me the same old excuses: “I’m too out of shape. I’m too old. I’m too busy.” He told me flat out there was no way he would ever wear a gi. Actually, I was a little concerned when he finally agreed. His excuses are pretty valid, after all: He’s no spring chicken, and all those years of narcotics and cigarettes and drinking and the ATV falls sure didn’t help his physical condition. There was some concern his heart would explode or that all those years of toxins would come leaking out of his ears. When he first stepped onto the mat I just hoped he wouldn’t die.

To my surprise he didn’t suck. He picked up moves pretty quickly from coach Igor Gracie, he wasn’t horribly clumsy, and, most importantly, he didn’t display any symptoms of imminent death! This was shocking. For someone who was so adamantly against it, he actually seemed to be enjoying himself. I couldn’t wait to hear his thoughts.

Ottavia: Why did you agree to do this?
Anthony Bourdain: Because I love you. Because you bribed me with the promise of prescription painkillers. Because when I agreed to do it, it was so far in the future that I never really considered what it might be like, given my age and general out-of-shape condition.

Were you nervous before your session?
Yes. Not so much about injury but public humiliation. As I recall, when you got me a few sessions with a personal trainer, I spent much of my first and last session lying on the floor struggling not to vomit in front of strangers. I definitely did not want to repeat that experience.

Were you uncomfortable being in such close contact with another person?
No. Not really. I wrestled a bit in high school. Did the judo thing. I’ve jumped out of a plane strapped between the legs of a fat Elvis. So I’m comfortable with the man-on-man-action thing. I’m pretty confident that grappling with another man isn’t going to cause a late identity crisis.

What was the best part of the training?
Surviving it with honor. I enjoyed that moment of realization that I really do understand the rear-naked choke and could possibly use it in a field situation. (Actually, I realized I have used it, in the kitchen once, to restrain an enraged butcher from killing my sous chef.) I’m feeling pretty good about that. If I’m in a bar fight with an enraged vegan and lucky enough to get his back, I’m pretty confident I could stand a chance. It also made a certain kind of “sense” that I didn’t anticipate. There is a technical satisfaction in slipping out of a situation. Geometrically, I’m talking about. Like, a couple of times I found myself thinking, “Who knew? This shit actually works! It makes sense.”

Takedowns were fun. The sweep Igor taught me was pretty cool–and unlike a lot of the judo throws I learned years ago, actually useful, I’d think, in a real, non-gi situation. My armbar potential? Not so great. I can’t see myself pulling that off anytime soon. It takes a cat-like grace and speed I don’t possess. Armbar? No. Not yet. Crowbar better.

The best was that the whole time our daughter was watching. She’s 6 and already far more experienced at BJJ than me and she seemed proud of me, which made me very happy.

What was the worst?
Those fucking gis may look cool but they’re hot. And stiff. I was baking like a fucking meatloaf in that thing.

How did you feel afterwards?
I felt strangely elated and even proud of myself afterwards. I hate exercise, as you know. But this seemed to have a point to it. It was, as you’ve said many times, kind of a mental challenge, a chess game, in addition to the physical aspects. You feel like you’re getting a bit better at something useful. Physical fitness is not for me its own reward. This, however, was rewarding.

Of course I was a bit sore the next day. But the drugs really helped.

Would you do it again?
Yes. Yes I would. It’s really only a matter of finding a way to do it regularly. Given my ridiculous travel schedule, that might be tough. Maybe I need to hire a Gracie to travel with me.

What did you take away from your lesson?
Once I got your back, and my hooks in? You’re fucked. Okay, not really. Maybe if I had your back and my hooks in and a Howitzer. But I actually had fun. And came away feeling strangely good about the world. I’d actually consider doing it again. In fact, I will do it again. And this is a major development.

Anything you want to add?
I’m still not sparring with you, okay? And yes, I know you can still kick my ass.

And there it is, the ultimate proof that jiu-jitsu really is for everyone.”