Tom DeBlass Opens Up for CNN: “I Was Sexually Abused As A Child” 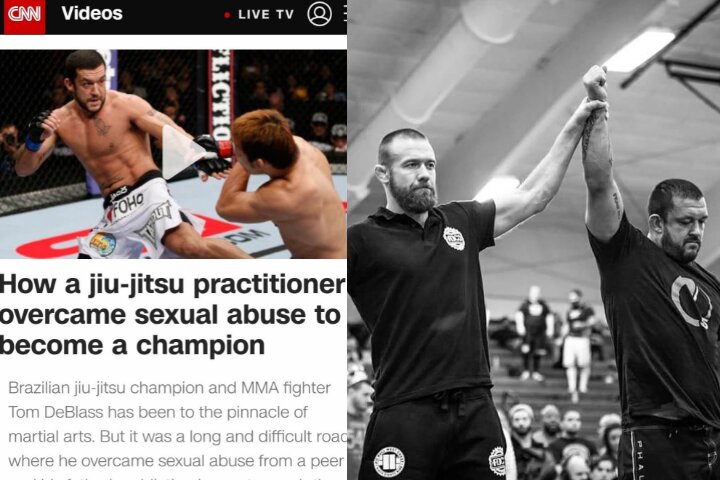 One of the most well-known and appreciated BJJ athletes and coaches, Tom DeBlass, recently published his very own autobiography! “How You Bear It: Triumph And Resilience In Life” reached #1 on the Amazon bestseller list in no time; a success that brought CNN’s attention.
However, it’s not just the success of Tom DeBlass that catches the eye. More than that, it’s his story.

In an interview for the news network, Tom spoke about his love for Jiu-Jitsu:

It’s a proven fact that physical activity raises serotonin levels and releases endorphins, it’s just healthy and good for you. It’s recommended.
Jiu-Jitsu is more, you know, it’s a push/pull type thing and it’s very complex… And, you know, it’s just addicting. Every single day, you’re learning something that you didn’t think existed.
You find out about yourself. You find out things you didn’t necessarily know before, and I don’t believe other martial arts do that as much as Jiu-Jitsu does.

Tom experienced a difficult life in his youth. He witnessed the effects that alcoholism had on his father, as well as experienced sexual abuse by an older child. Now, he hopes that by speaking out in the autobiography, he can empower other victims of abuse to heal:

When you’re a child, you’re very pure, you know, you’re very innocent. When that happened, I thought it was my fault. That’s probably one of the things that changed me the most because, in order to cope and deal with life, I had to, like, make myself kind of emotionless. I had to make myself not care.
And, you know, now as an adult, I understand life is life and it happens. I’m thankful for all my experiences, including that one; because, if I never went through that, I wouldn’t quite understand someone who did.

And, you know, I accepted it. I said: “I will take what I can from it and learn, and try to make myself a better person.” And one of the things that always helped me was that I always remember, like, I’m not the only one who went through it.
What really helped me become at peace was, like, I probably truly didn’t come really at peace with it until the book because, if I talk about it, how many other men is that helping?

DeBlass also emphasized that it’s through coaching that he wants to help people change their lives:

I don’t even look at it as me just thankful that I can give it to kids. Because, I think sometimes a lot of the kids who do it will, you know, they’ll do it and it will help them and it will change their lives, but maybe it’s not something that they’ll do forever.
But some of the adults who find me, you know, this is their last chance for some of them. They’re just fed up in life.

I’m thankful to provide something for people that I think people from all walks of life could benefit from.

Watch Tom DeBlass and his entire interview for the CNN on the following link.