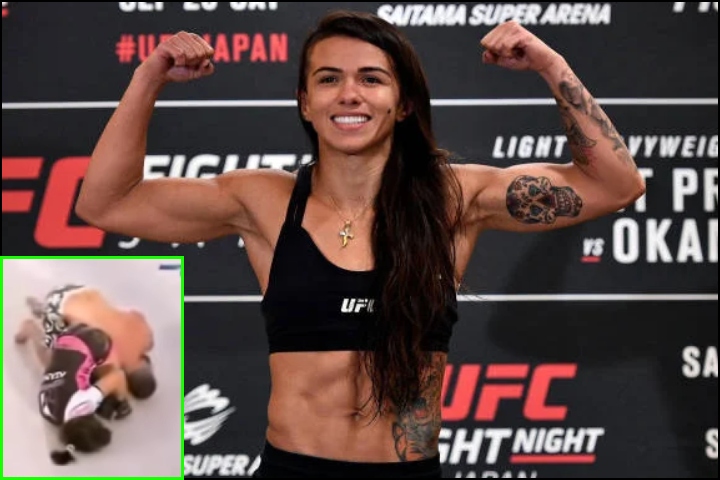 Claudia Gadelha is a former UFC strawweight fighter, who broke into the MMA scene when there were very few women fighting in it.
But before turning pro, she also took part at a Brazilian variety show (that was similar to “Jackass”). There, she was involved in a lot of challenges; one of them being MMA matches between men and women.

This show would pit average, middle-aged men in a cage against fighters. At that time, they had to face Claudia Gadelha who, even though she wasn’t a professional fighter back then, had already been an expert athlete.
Among other things, she trained Brazilian Jiu-Jitsu at the famous Nova Uniao gym, where many MMA legends used to train – such as Jose Aldo.

In these matches, Gadelha proved how useful her BJJ skills are. Her takedowns were flawless as she took the middle-aged men to the ground; where she’d control them and often put them into a submission, tapping them out.
She even managed to put one of them to sleep! Watch it take place on the video below:

Gadelha is a 3-time Brazilian Jiu-Jitsu world champion. She joined the UFC back in 2014, and even had a title shot opportunity against Joanna Jędrzejczyk – but lost via decision.
She retired from mixed martial arts in 2020 and currently works for the UFC on a project of developing young athletes in Brazil.