The Heartbreaking Story of Nick Diaz & His High School Girlfriend: “I’d Run Seven Miles to Her Grave Every Day” 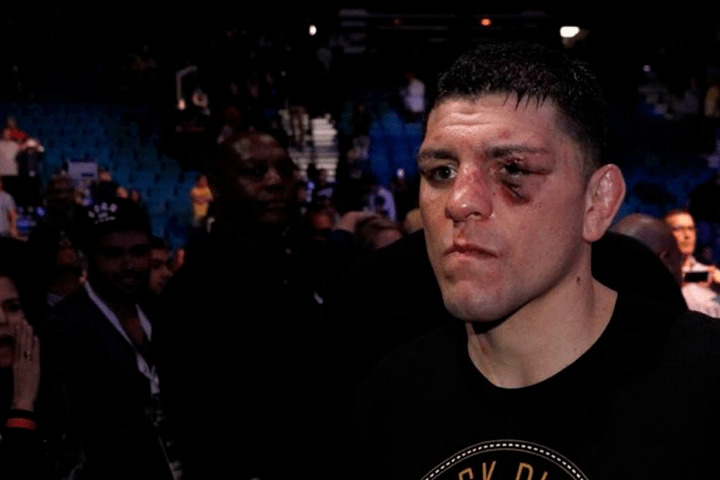 Nick Diaz recently came back from a long layoff to fight Robbie Lawler at UFC 266. He didn’t appear to be in the best physical shape; Lawler earned a third-round TKO after Diaz chose not to continue fighting after he was dropped by several strikes.
Nevertheless, Diaz stays a fan-favorite. However, lot of people still don’t know that Diaz has a heartbreaking story behind him – of his high school girlfriend, Stephanie, who committed suicide.

She walked in front of traffic. Following her death, Diaz would run to her grave every day to tell her that he would make it as a fighter.
He opened up in an old interview given to MMA Fighting:

There was no one like me there when I got in the high school. I would get in fights with kids from that same school and get kicked out of high school.

I had a really hot girlfriend and was very self-conscious about what I was wearing and couldn’t afford nice things and got in fights because her ex-boyfriend was a year older and the mascot on the football team, so the coaches would tell the football players that I was bad news and they would start shit. A lot of them were on steroids, a lot of them were Mexican gangbangers people who were on meth and getting stabbed.

Before anybody in my class made it out of high school, I was in a continuation, which I also got kicked out of because my friend Bart was also in the class and got into a big fight, which the teacher had to break up and did not want either of us in the school anymore, so I tried homeschool but that was never going to work. I was so far behind, it was never going to happen and by then I was training to be a pro fighter. My girlfriend knew it but had started dating Bart to make me jealous. He had a gun and neither of us wanted to piss him off because he would walk around with it.

Before I ever had my first pro fight, July 5, 2000, Bart had a party at his house. The night before, Stephanie had told me she loved me. After the party, I was gonna go back to her house with her brother — he was my best friend — but some friends weren’t doing well and headed to my house. So I had to go.

An hour later I got a call from her mom saying, ‘Are you with Stephanie?’ She came straight to my house to get me, took me up and down the Frontage Road on Highway 99 by my Grandma’s house next to their trailer park.

There was a wreck on the freeway. I jumped the fence and saw only one car and ambulances.

She had walked and killed herself on the freeway. The girl I loved more than anything had tried to kill herself for the third time and succeeded.

She was gonna go to college. She was an avid student and and was doing everything I couldn’t while living in a trailer park where everyone was doing dope.  Meanwhile, I focused my whole high school years worried about what her and her friends would think if I lost a fight to her ex-boyfriend and football friends. I could never make attendance, hung out with the wrong people to hold my ground as a fighter and someone who I would fight for was important to me.

There was no way I was gonna go to school. I had no money, no car. I would have driven there and stopped her. After that, I was grown up. It was all over. I wasn’t a kid anymore. I won my first fight in the first round with a choke and all I could think about was her, just like when I was in school.

I would run seven miles and back to her grave just to promise her I would make it as a fighter like she knew and had told me she knew and was proud of me.