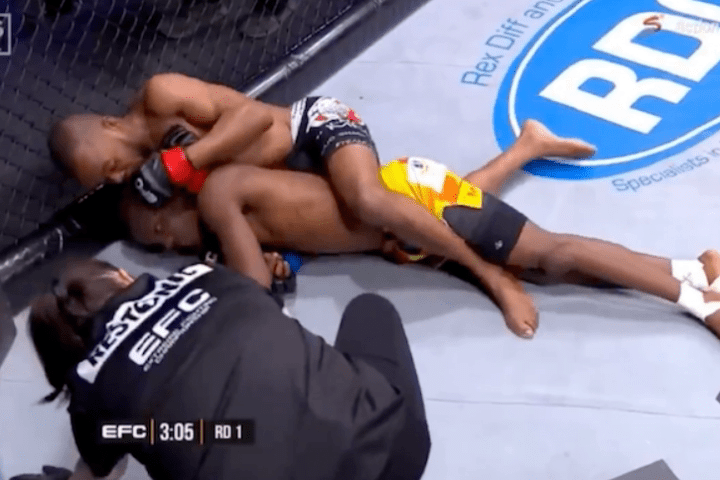 Fighter’s safety is paramount in MMA – and the referee has a large say in it. So, whenever the referees don’t do their job properly, they’re risking (serious) injuries to the fighter.
For instance, if there’s a choke locked in and the athlete isn’t responding, one of the most common ways of checking the athlete’s state is lifting his arm up and seeing if it’s limp. If it is, the fighter is out and the match needs to be stopped.

But that’s not what happened at the South African EFC 88 event. One of the flyweight fighters was caught in a Rear Naked Choke, went out, and stayed out for much longer than he should have.

In a fight between Julio Plaatijies and Teboho Ntene, it appeared that Plaatijies had choked out his opponent. But the referee let the fight go on for quite some time, despite checking Ntene’s arm multiple times and its limp reaction being obvious, even to the commentators of the match. Check out the video of the choke and the referee’s (in)action the Twitter link below:

Later on, it was announced that MMA South Africa (MMA SA) would review the footage and focus on the referee’s actions. This’s been the statement by the MMA SA:

The Various angle footage has been requested from EFC this morning by the Pro Regulatory Commission of the Federation because as with all fights that have an apparent contentious stoppage, both the fighters safety and the development of officials is of paramount importance in the sport of MMA.