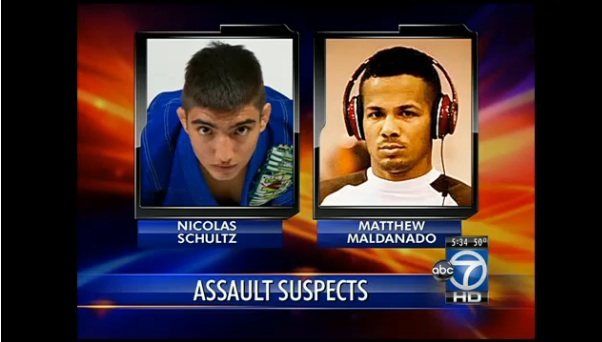 Two men are in police custody following accusations they committed a vicious crime.

Matthew Maldanado, 26, and Nicholas Schultz, 21, are accused of repeatedly raping a 20-year-old Fairfax woman as she fell in and out of consciousness in the parking garage of St. Matthews Cathedral on New Year’s Eve.

According to court documents, the young woman, Maldanado and Schultz all know each other from the Lloyd Irvin Martial Arts School in Camps Springs where they trained.
Police said the woman bumped in the two men at a club in D.C. They offered to escort her to an instructor’s home, because she was too drunk to drive.
But the men took her to the St. Matthew’s Center parking garage instead, police explained, where surveillance cameras captured Maldanado raping the woman and Shultz joining.
After Maldanado left, police said, the tape shows Schultz raping her repeatedly. She told police he said at one point, “I am sorry. I am a sick bastard.”
A roommate in the Clinton home where both men live said he was out of town when the alleged rape occurred.
“I have no idea. I know nothing,” he added
Schultz told the court after he was arrested that he lives in a Jiu Jitsu fighter house.
“What I know is they have always been real nice to me, really good friend. I like them a lot,” the roommate said.
Neighbors said police had the area blocked off the night Maldanado and Schultz were arrested.
“Swat team, riot van, one man in riot gear…,” one neighbor said. “Well, I’m glad they caught then…,” another neighbor added.
Detectives said the woman claimed she had been raped, but it wasn’t until they saw the tape, that the extent of the allegations emerged.
They wrote of the alleged attack “She fell backwards…striking her head against the wall…later struck her head again…and noted she collapsed to the ground…several times…he head again hitting the ground.”
At the end of the report, the police said the two suspects left the victim on the concrete. A passerby later heard her cries for help.
Maldanado and Schultz will appear in court Thursday.

What master Lloyd Irvin had to say about the alleged rape incident involving two of his male students on a female team member. Statement from Lloyd Irvin:

“There has been a horrible alleged incident that occurred that involved 3 people on my comp team. This is a legal matter that I am not authorized to speak on and has nothing to do with me personally. However, for you idiotic people who come on my page to attack me for the actions of two grown men, let me make something very clear to you:

I don’t care if you hate me, my marketing, my team or anything I do, but let’s not lose sight of the REAL issue here. A young lady was allegedly harmed. Someone who is a friend, a student of mine and who knows she has my full support during this difficult time.

This is not a laughing matter or a time to try and turn your personal dislike for me or my team into an irrelevant story.The focus should be on the well-being of this young lady. Do not take away from the severity of these charges by trying to make it about me. This could be any one of our mother’s, sisters or daughters and I take this very seriously

For the record I was just with this young lady this morning and she is looking forward to working towards her goal of becoming a bjj world champion. Anyone that attempts to come on my page and attack me during this serious time is beyond sick!”