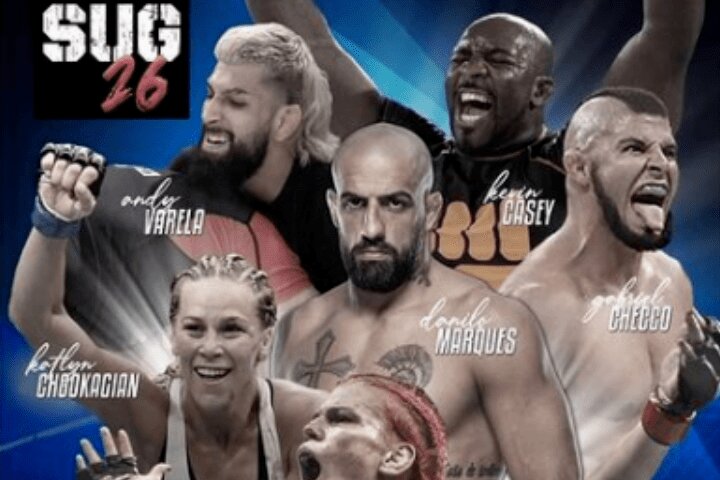 The Submission Underground (SUG) 26 championship is taking place on Sunday 15, and will feature a mix of athletes with very serious BJJ and MMA backgrounds. The tournament is headlined by a tag team match-up that involves Pedro Marinho and Servando Almaraz; forming the team Gracie Barra that’s facing the team Mat Mafia, made up of Alan Sanchez and Benji Silva.
Lower on the card, Gabriel Checco – an SUG veteran – will take on Danillo Marques, who is the current UFC’s light heavyweight athlete. Also, the former UFC’s flyweight athlete Katlyn Chookagian is making her SUG debut against the current UFC’s flyweight athlete Gillian Robertson.

The co-main match between Marques and Checco is a match-up between mixed martial arts veterans. Marques has 14 professional MMA fights to his name and is currently on the 2-1 record in the UFC’s light heavyweight division. On the flip side, Checco has a 11-5 record in MMA; but has recently streamlined his efforts towards grappling. He has a 4-3 SUG record since 2019, and has last fought at SUG 22 – defeating Philip Rowe, yet another UFC fighter.

Katlyn Chookagian is a Renzo Gracie brown belt who owns one submission victory in MMA, but has been a student at Renzo’s for a long time. Her opponent, Gillian Robertson, is a great submission grappler specialist – whose 6 out of 9 professional MMA wins have come via submission. She has last fought at SUG 23, when she lost to Raquel Canuto.
The main card is rounded up between the 10th Planet’s Andy Varela and Kevin Casey, who is a Rickson Gracie black belt and a UFC veteran.