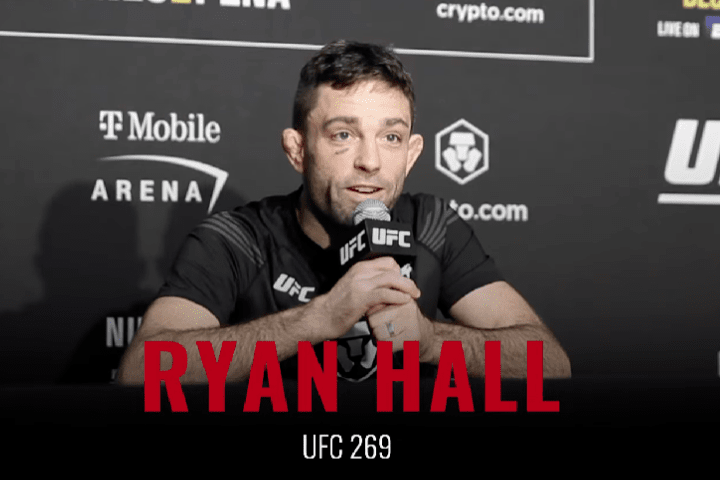 Ryan Hall got back on track in MMA with his unanimous decision win against Darrick Minner at UFC 269. This was Hall’s first win since July 2019; after a lot of injuries and cancelled fights, as well as a loss to Ilia Topuria at UFC 264.
Following this victory, Hall took part in a post-fight presser, where he emphasized that he misses competing in Brazilian Jiu-Jitsu and that he wants to compete at ADCC 2022:

I’m looking forward to doing ADCC, Abu Dhabi submission wrestling next year. I’ve been doing Jiu-Jitsu for almost 18 years now.
I haven’t competed in that sport in a long time, but I do have hundreds and hundreds and hundreds of matches. Obviously I’ll be doing some Jiu-Jitsu prior to that if the stars align and I’m able to get myself in there… Inactivity hurts me a lot more in MMA than it does in Jiu-Jitsu.

At UFC 269, Ryan Hall showcased his grappling skillset in full light. In the first round – and after the very first minute, Hall rolled for a Leg Lock; but Minner saw it coming and freed his knee. However, Hall does it again and goes for a Heel Hook. He then comes up on top after which Minner goes for a Single Leg and Hall goes to Closed Guard.
Even though he was in danger of an Armbar, Minner manages to posture up and stand back up to his feet again. From there, the two exchanged strikes while standing and ended up in Half Guard, with Hall on top and delivering punches from there.

Then, in the second round, Hall almost got an Armbar – but Minner picked him up and slammed him in order to escape. Then, Hall established Closed Guard again, from where he delivered some powerful elbow strikes; even going for an Omoplata variation in the end.
Ryan Hall used the beginning of round three to land some kicks, whereas Minner went all-out on strikes. Then, in his signature way, Hall rolls and gets a Triangle Choke in place. However, after then going to Closed Guard and snatching what seemed to be a deep Heel Hook, he doesn’t get the tap.

Nevertheless, Ryan then establishes Mount and soon goes for a Head & Arm Choke – but, surprisingly enough, doesn’t try to finish it. He utilizes it to control Miner until the end of the round.

That’s one way to defend an arm bar 😳

In the end, Ryan Hall was declared a winner by unanimous decision.