(Rumors in Brazil) Minotauro Nogueira On Anderson Silva’s Loss: “If people knew what really happened in the defeat of Anderson, they would be disgusted.” 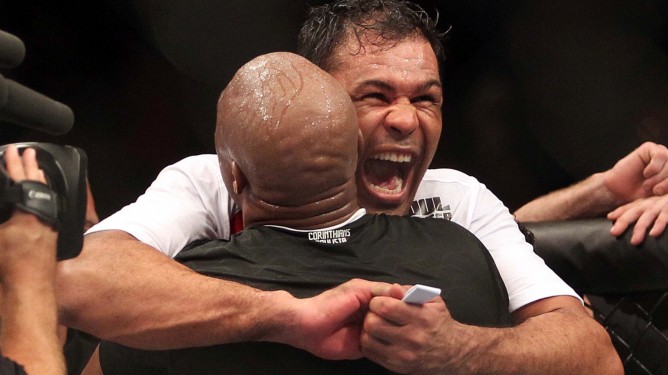 Some Brazilian Media are all over the rumors that Anderson Silva threw the fight against Chris Weidman. They are just rumors and should be treated as such. Here is a translation of what some Brazilian sources are saying. However we cannot find an official statement of Minotauro saying that in English or in Portuguese. This goes however in the same direction as the recent statement from mmafighting.com that Anderson Silva wants to rematch Chris Weidman again after all and wants the fight to happen soon as possible and this for a million dollar paycheck.

“Minotauro has declared the following statement: “If people knew what really happened in the defeat of Anderson, they would be disgusted.”
All Brazilians were shocked and saddened by Anderson having lost the belt in Vegas. But they don’t need to be. What is discussed below is the news firsthand being investigated by radio and newspapers throughout Brazil and some foreigners, specifically Wall Street Journal and Sports Gazette and the media should be released soon, and the evidence will confirm the facts.

Rumor: Anderson Silva SOLD the UFC belt. The fighter’s staff was advised, at 1:00pm on July 6 (Fight Day), at a meeting involving Dana White, Pedro Rizzo and Mr. Lorenzo Fertitta. At first they were very upset, and Anderson refused to sell the belt.

The acceptance came through the full payment of premiums, US$70K for each member of staff, plus a bonus of U.S$400K for the whole team, a total of US$23 million by Nike. Still, Anderson refused to participate.

Their situation was only resolved after the representative of Nike threatening to withdraw its lifelong sponsorship of the fighter, valued at more than US$90 million throughout his career. Thus, it was agreed that Anderson would be defeated by points, but the apathy that befell the fighter made Chris Weidman, who absolutely did not participate in this negotiation, TKO Anderson.

Dana White applauded the team collaboration of Silva, since the change of belt has brought balance to the category.”