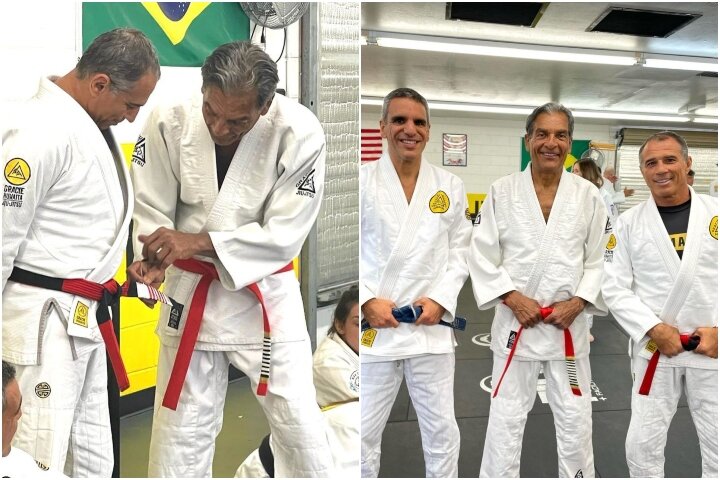 Royler Gracie is a true legend of Brazilian Jiu-Jitsu. A son of Helio Gracie, Royler has been the first so-called “King of BJJ’s Featherweight Division”, setting a record for the number of world championships back in the day. He also fought in MMA, but ended his career overall in 2006. Since then, he’s been a coach at the Gracie Humaita academy in Rio de Janeiro and developed numerous athletes; such as Wellington “Megaton” Dias, Alexandre Ribeiro, Renato Barreto, and many others. Then, in 2010, he opened up his own academy in the USA (in San Diego).
Today, he’s a member of both the IBJJF and the ADCC Hall of Fame… And is, as of a couple days ago, an 8th degree BJJ coral belt!

Namely, Royler went for a visit into the Gracie Humaita academy in Hemet (California). There, a belt promotion ceremony took place; 13 new blue, 4 purple, one brown, and 2 black belts were given… As well as a 6th degree black belt for Professor Omar Salum.
But what Royler didn’t expect is that his brother, Rorion Gracie, would promote him as well! He did so to the surprise of everyone in the room – you may watch the ceremony on the video below: