Roger Gracie: “I’m Considering The Option Of Moving up A Weight Class In The UFC.” 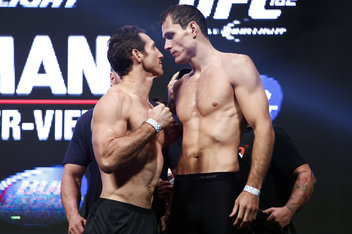 After his decision loss on his UFC debut to Tim Kennedy, Roger told Tatame that he is analyzing the situation. He has said that he is considering going back up to Light heavyweight, his last weight class where he beat Kevin Randleman and Trevor Prangley before getting knocked out by Mo Lawal:

Is there is a chance for you to move up a weight class?

There is a chance. I’m considering this. To continue in this weight category and the same thing happening to me like in this last fight, I would retire, quit MMA (laughs) or I have to find a way of losing weight that does not affect me.

Despite the setback, how was your UFC debut?

The experience of fighting in the UFC was great. It is a mega event, the media exposure was huge, great visibility and it is super organized. I’ve already fought in Las Vegas, other cities. It was one of the biggest UFC events of the year.

Do you hope to have a nother fight before the end of the year?

I hope so. We’re still in the middle of the year, and I fought twice … I’m training again.

Did you watch Anderson? What do you think?

I watched in the locker room. He fought that way he usually does, trying to psych out Weidman and I think he was getting there. Weidman slowed down in the second round and, before getting knocked out, the fight was practically won by Anderson, in my view. He passed the point of wanting to jokingly make fun of his opponent. He’s done it other times and did well, but this time he got caught.”