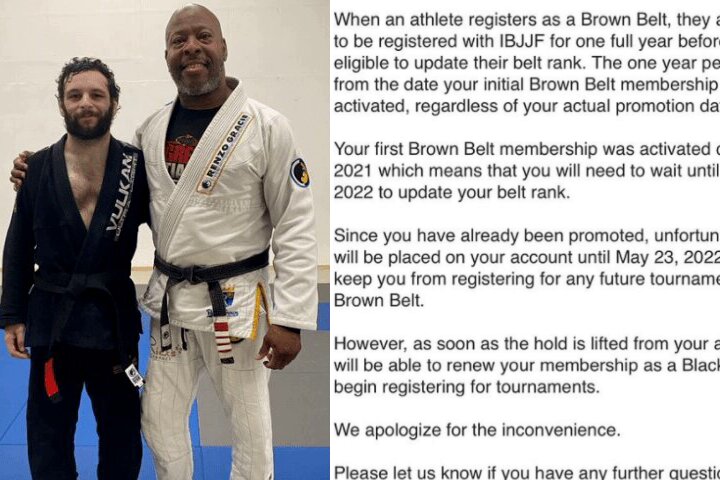 Robert Degle – a long-time student of John Danaher – was promoted to black belt on Tuesday, August 10. However, immediately after the promotion took place, he was suspended by the IBJJF!
Here’s what happened, in Degle’s own words:

So I guess I won’t be doing any @ibjjf tournaments for 10 more months. What an unbelievably stupid system. I would’ve been better off not receiving my black belt until next May so I could have at least done brown belt tournaments. If you wonder why I won’t be doing any IBJJF events for the next 10 months this will be why. 10 months is a long time. I can’t even guarantee this sport will interest me at that point.

SO, WHY WAS DEGLE SUSPENDED?

In other words, according to the IBJJF’s standards, Degle has to be registered as a BJJ brown belt for at least one full year – before he can upgrade his belt rank to the black belt level. This doesn’t add up to what Degle’s experienced beforehand however; as he has been practicing and competing at a brown belt level for much longer than 12 months.

Degle is well-known for his highly technical performances at promotions like the Fight To Win, the Grapplefest 8, IBJJF events, and so on. He’s perhaps best known for being ranked number one in the advanced No Gi male adult category and number two in the overall No Gi category at Grappling Industries.
He’s also an excellent coach, who has been giving a ton of free content on his Youtube channel for quite some time.

What’s more, Robert has been a guest on one of the BJJEE Podcast episodes. In our episode, we spoke about the trash talk that’s infiltrated BJJ, why being an instructor is more rewarding than being a competitor in the long run, the link between Philosophy as an academic study and BJJ… And so much more!