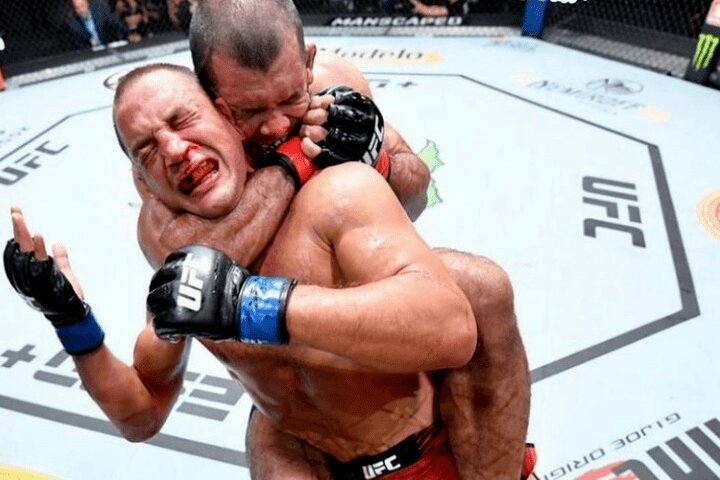 Rodolfo Vieira managed to put himself back on the winning streak in his fight against Dustin Stoltzfus at UFC Vegas 31 – winning via Rear Naked Choke!

THE COURSE OF VIEIRA VS. STOLTZFUS FIGHT

The first round was mostly spent in the fighters feeling each other out. This led to a few heavy-duty jab combos from Stoltzfus as the round progressed, with the two exchanging a lot of punches and several leg kicks down to the end of the round; as well as with Stoltzfus attempting a takedown as the bell rang.

The second round brought more enjoyment for grappling fans. Vieira successfully executed a Double Leg takedown and brought his opponent to the ground at the very start. After Stoltzfus got up, the fighters exchanged a lot of punches. Vieira attempted to get another Double Leg with around a minute to go in the round; which his opponent successfully avoided.
Stoltzfus went for a takedown himself (with around 15 seconds remaining), drove Vieira against the fence, and ended up in a clinch.

It was in the round three that Vieira managed to get his win. After being rocked with a combination of punches, he got a yet another Double Leg against Stoltzfus; but his opponent got back to his feet. Then, he managed to drive him back against the fence and down to the ground again (despite being punched from above repeatedly). Stoltzfus tried to take advantage off this by working on a Guillotine Choke.
Vieira pulled his head out, however. And this time, as his opponent got back up to his feet, he got to his back and locked in a Rear Naked Choke as Stoltzfus was standing up. Stoltzfus then fell back to the ground, and Vieira managed to submit him.