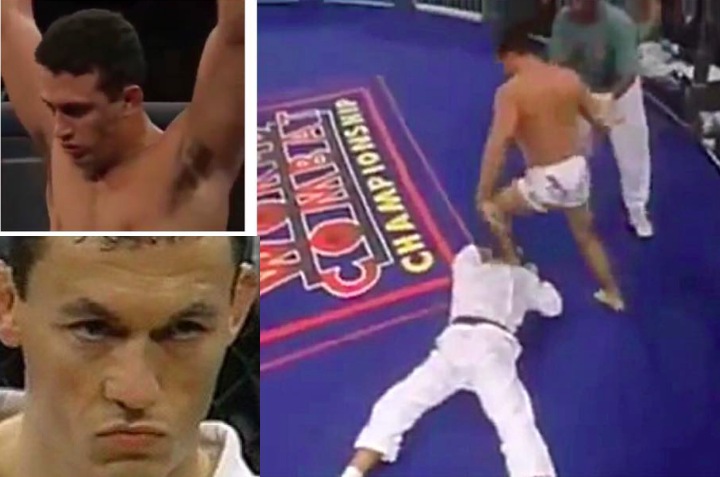 Who remembers the classic grudge Vale tudo match between the legendary Renzo Gracie and world class Judo Ben Spijkers from back in 1995? Renzo Gracie was heavily criticised for stomping on the head of the defeated Judoka.

Ben Spijkers represented the Netherlands in Judo at three consecutive Summer Olympics (1984, 1988 and 1992). He won the bronze medal in the men’s middleweight division (– 86 kg) in Seoul, South Korea (1988), alongside Akinobu Osako from Japan. In 1995, Spijkers tried his hand at Mixed Martial Arts competition by competing in the World Combat Championship and Shooto events.

Word on the street is that Ben Spikers prank called Renzo all night in his hotel room, in the press conference, taunted him, and insulted him by saying Renzo’s eyes look like Ben’s girlfriend’s eyes.

“When trashing talk goes wrong…
late night in Winston Salem N.C my hotel room phone wouldn’t stop vibrating even after I wrapped wit my Gis and on my clothes and locked inside my traveling suitcase.. it’s 3:30am and that unstoppable ringing prevents me from sleep. I knew who it was.. My first opponent on WCC.. The Judoka Ben Spijkers from Holland, that was his second naive attempt to intimidate me, the first it was at the weight in.. None of the fighters knew who they were fighting, you would only learn as you step up after being called to check your weight.. as I square off with him a bunch of insults came out his mouth and I still can’t believe I was able to control myself since I didn’t expect it, and my common reaction would be at least a head butt on the bridge of his nose since our heads were so close. I will hurt him… My uncle Carlos my coach and roommate only answer was “What’s his will come tomorrow, since he really does deserves.” He received his punishment, but I don’t think a little stomp on the head after being choked out was enough to educate him, since on the next day he was arrested for assaulting an airline stewardess.. he hit a woman… if I knew it, I would have broken his arm so he would never commit a sin like that again.. regrets???? None..I did what had to be done.. I did the right thing
“If an injury has to be done to a man it should be so severe that his vengeance need not be feared.”
Niccolò Machiavelli, The Prince”

Here is the infamous fight: