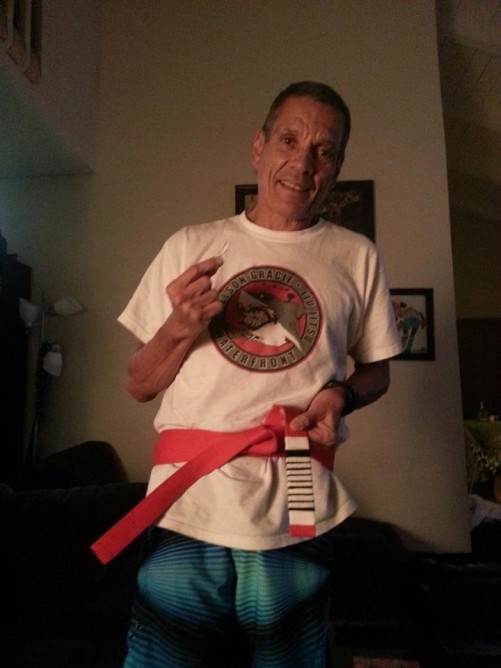 When Brazilian martial artist Relson Gracie moved to Hawaii in 1988, he had one student and struggled to find more. Since then, however, he’s built an empire of more than 50 Relson Gracie Jiu Jitsu schools around the world, including 12 in Hawaii.

On Saturday, the Hawaii Kai resident will be promoted from 8th Degree Red-Black Belt to Red Belt, the highest ranking in Gracie Jiu Jitsu. The promotional ceremony takes place in the Kaiser High School gymnasium at 1 p.m., followed by Gracie’s first seminar as a Red Belt.

“Before Hawaii, I lived in Monterey, Calif., for three years, and then my friend Carlos Valente brings me to Hawaii to teach private out of his garage in his home in Niu Valley,” recalls Gracie. “But I come to Hawaii and I had a little problem to teach jiu jitsu because (at that time) people really don’t know jiu jitsu. People never hear of jiu jitsu before.”

Born and raised in Brazil, Relson (pronounced “helson”) is the second oldest son of the late Grand Master Helio Gracie, who is credited for innovating the jiu jitsu he learned from Japanese jiu jitsu champion Mitsuyo “Count Koma” Maeda. Helio, along with his brother Carlos, then founded Gracie jiu jitsu, commonly referred to as Brazilian jiu jitsu. In 1985, at his family’s request, Relson moved to America to spread the teaching of Gracie jiu jitsu – which he firmly believes is the best form of self-defense in the world.

But it wasn’t until his time in Hawaii, and his brother Royce’s debut in UFC (Ultimate Fighting Championship), that his enrollment grew exponentially.

In 1989, Relson started teaching out of his house near Kalani High School and at the University of Hawaii, where his students included people from the U.S. secret service, FBI, DEA, police and fire departments and military. As Royce (who Relson coached) continued to dominate in UFC in the early 1990s, the popularity of Brazilian jiu jitsu skyrocketed. By 1996, Relson outgrew his space at UH with 700 students and a waiting list of about 150, and opened the Relson Gracie Main Academy on Waialae Avenue.

Today, it’s hard to keep count of Relson’s students and schools, which are run by his Black Belts. On the Mainland, there are 40 schools spread throughout Arizona, California, Colorado, Florida, Georgia, Kentucky, Maryland, Mississippi, New Mexico, New York, North Carolina, Ohio, Pennsylvania, South Carolina, Texas and Virginia. He also has schools in China and Brazil, where he plans to build a jiu jitsu camp, and says more schools are in the works, including one opening on Kauai soon.

Now retired from competition (he ended his career undefeated after 22 years as Brazilian national champion, and a fight record of 138-0), Relson regularly travels across the world for seminars. He recently conducted 43 seminars over 45 days on the Mainland.

Relson will conduct his last seminar as a Red-Black Belt on Friday, April 5 at the University of Hawaii at Manoa (in the Athletic Complex Studio 4) from 7 to 8 p.m. Cost is $50 per person. There will be autograph and photo opportunities following the seminar.

Then on Saturday, April 6 at 1 p.m., Relson will receive his Red Belt in the Kaiser High School Gymnasium.