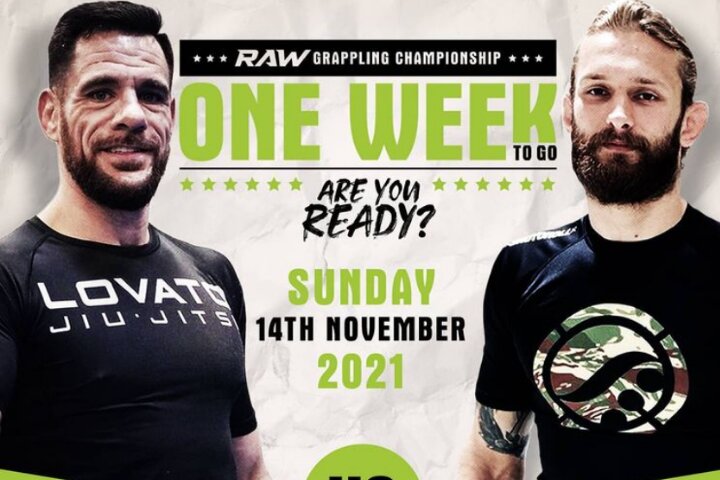 Brazilian Jiu-Jitsu is rapidly growing in popularity. On November 14 (Sunday), the first edition of the Raw Grappling Championship will take place in London; featuring exciting superfights and an eight-man submission-only grand prix.

The Championship seems to be set on realizing phenomenal superfights. The first one that catches the eye is Rafael Lovato Jr. vs Adam Wardzinski. Lovato is a No Gi and Gi world, as well as a former Bellator MMA middleweight champion; who recently returned to competing in BJJ at full power.
Wardzinski, on the other hand, is one of Europe’s most well-known competitors and an ADCC veteran, known for his Butterfly Guard game.

Yet another superbly exciting superfight is between Lucas “Hulk” Barbosa and Gerard Labinski. Barbosa is on a winning streak, with his most recent victory being a submission against Gilbert Burns at BJJ Stars 7; while Labinski is a veteran competitor himself.

The promotion’s submission-only eight-man tournament will be just as exciting as its superfights. Josh Hinger, for instance, is a multiple time No Gi world champion, as well as an ADCC bronze medal winner. Though a likely favorite for winning the tournament, he’ll have a formidable opponent in his very first match – Bradley Hill.
Yuri Simoes is also stepping on the mats; as a two time ADCC gold medalist, he is back on the winning streak with recent wins against Devhonte Johnson and Fellipe Andrew. His first challenge will be Jed Hue, an extremely versatile Leg Lock player.

Check out the full line-up below: