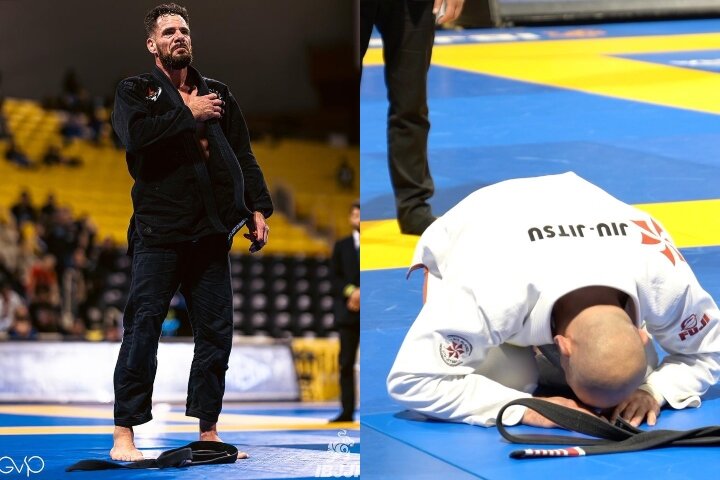 The 2022 IBJJF World Championships have been emotional, and not just because of the results. Rather, it’s also because two legends decided to retire from IBJJF, gi-oriented competition – Rafael Lovato Jr. and his longtime coach Xande Ribeiro.

Lovato won his first-round match against Erberth Santos and then faced Guilherme Augusto, Pans and Brazilian Nationals champion, in the quarterfinals. Despite all-out effort, Lovato lost the match on points.
After the match, he laid his black belt on the mats, symbolizing his decision to retire from IBJJF competition.

After the match, Lovato gave a short interview, emphasizing that it is his wish that both him and Xande have inspired others on their BJJ journeys:

If anything, I just hope that we’ve been able to inspire people and make them see the way we carried ourselves and our attitudes… And, more than any title, that we’ve just had a positive impact on everyone’s lives. And, at the same time, (that we’ve) showed some beautiful Jiu-Jitsu and our hearts.
We put it all on the line, you know? In everything that we do.

Xande Ribeiro lost his first-round heavyweight match on points, against Harryson Pereira. And, as he laid down his belt down in tears, the crowd went wild in showing appreciation for all of that he’s done for BJJ throughout the years:

In a post-match interview, Ribeiro expressed his regret for not doing better. But he understands that it’s time to walk away from competition:

I could have done a little better. I don’t know, I just couldn’t find a rhythm. Four years without competing, you know? Coming back and doing this… I almost feel like I want to do it again. But I don’t know, just training for this, doing this is (competing) is so stressful now.

… And coming stepping in here, the rhythm sucked, everything sucked. To do this, I need to actually be on the mat and doing stuff like that. And it’s not something I want. I wish I would have had at least one more match today.
Well, that’s okay. No excuses, I did my best. So my timing and everything was off. Well that’s okay, I’m grateful. 31 years competing, 25 years competing in this, it’s time to walk away.