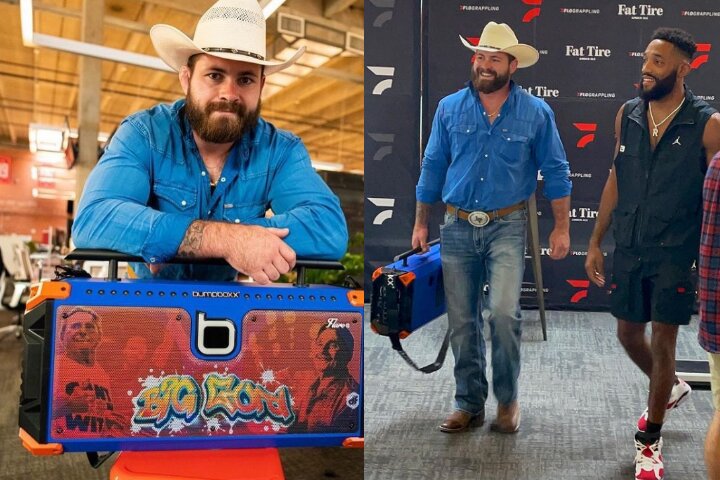 Gordon Ryan’s first appearance after a break from competition due to his stomach issue was a domineering one; he submitted UFC’s Philip Rowe four times in 15 minutes at Who’s Number One (via Heel Hook, Arm In Guillotine, Triangle Choke, Triangle Choke, respectively).
However, the BJJ community witnessed another great moment between the two athletes – before the match even began. Namely, Rowe decided to gift Ryan a custom-made boombox!

The boombox was made in such a way to honor Ryan’s father, “Big Gord”. Gordon didn’t hide how happy he was about the gift:

There aren’t too many times in my life I’m left speechless, but receiving this @bumpboxx from @phillyfreshufc definitely left me speechless and definitely almost made me cry on camera. Hands down top 5 gifts I’ve gotten in my life.

Rowe explained why he did it:

I started martial arts for my love of Jiu Jitsu I respect the sport and the art like no other it literally changed my life. Whether you’re a fan of @gordonlovesjiujitsu or not you have to respect him as a competitor and what he’s done for the sport. Tomorrow I get to compete against one of the best ever on the highest platform of profession grappling. I did a custom tribute Bumpboxx for Gordon in honor of his pops. Thank you @davefretz for the design. All the hate and drama in the world… Take 5 seconds out your day to put a smile on someone’s face and spread love.