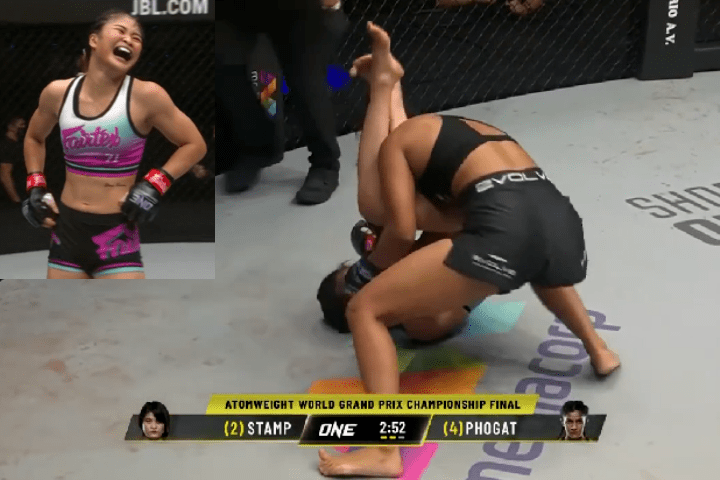 You know what they say: if you don’t succeed at once, try it again. Which is exactly what Stamp Fairtex did in her recent win at ONE Winter Warriors, against Ritu Phogat.

Before this important match, Fairtex was on a winning streak nevertheless. She beat Alyona Rassohyna back in September at ONE Championship: Empower; as well as Julie Mezabarba at ONE Championship: NextGen in November, both by decision. She’s had a 7-1 professional MMA record to her name up until December 3.

Then, in the second round of her ONE Winter Warriors match, Phogat shot for a Single Leg takedown. Fairtex defended and, after a couple of seconds, managed to lock a Triangle Choke.
However, even though she was trying to finish the Triangle by readjusting the lock and by repeatedly punching her opponent in the face, she just couldn’t seem to get the right angle for the submission. Then, as Phogat started to stack her, Fairtex went for an Armbar… Rolling her opponent over and getting the tap!

Check out the submission finish below:

With the win, Stamp earned a shot at ONE atomweight champion Angela Lee 🏆 (via @ONEChampionship) pic.twitter.com/31uPCRAaf6