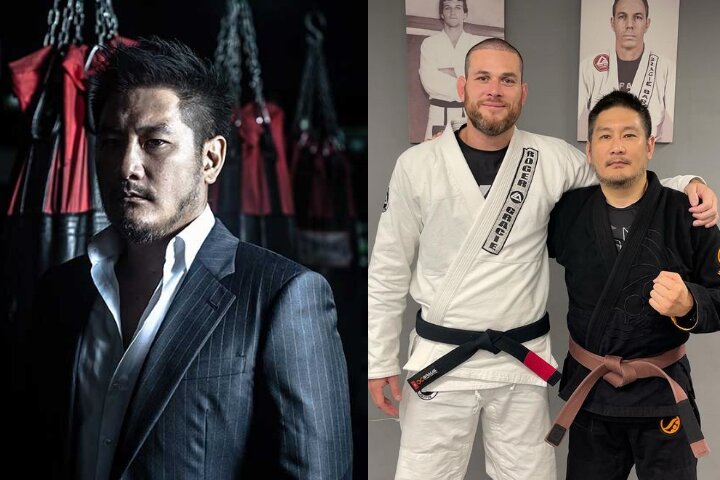 Chatri Sityodtong, an entrepreneur and a martial artist, best known as the Founder & Chairman of one of the biggest MMA organization’s in the world – ONE Championship – shared on his social media that he’s been training BJJ with Roger Gracie himself.
Sityodtong was on a work trip to London, where he got a chance to train with one of the best grapplers of all time. The newly promoted brown belt had this to say:

I just got back into Singapore from a work trip to London. Whenever I travel for work, I try my best to train Muay Thai and/or Brazilian Jiu-Jitsu wherever I am in the world.
For this trip, I was blessed to train jiu-jitsu every day after work with my good buddy, Roger Gracie. A 10x World Champion, he is the GOAT of Brazilian Jiu-Jitsu and also the former ONE Light Heavyweight World Champion. He generously spent 2 hours every day with me on the mats, sharing his knowledge and technical details to help my game.I’m terrible at jiu-jitsu, but I’ve had the good fortune of rolling with many world-class black belts over the last 16 years. (I have 6 years of experience in the Gi and the rest is No-Gi). I’ve never felt the kind of technical pressure that Roger has. He makes zero errors and has the tightest of games with the highest efficiency. The crazy thing is that he was only using 5% of his effort. We trained specific positions and also did some free rolling. I’ve never been swept, passed, mounted, and submitted so easily in my life.
His game is truly next level stuff. It is incredibly simple, and yet it is unstoppable. His application of the tiniest of details is extraordinary. Amazingly, Roger uses moves that every white belt knows and he submits the highest level black belts in the world with those moves. As Albert Einstein said, “The definition of genius is taking the complex and making it simple.” For me, Roger is a once-in-a-lifetime genius.
Thank you for your generosity and kindness to me, Roger! I am truly full of gratitude for our friendship. OSS!!!