Not All Heroes Wear a Gi: Guy Takes Down Robber, Puts Him Into Rear Naked Choke 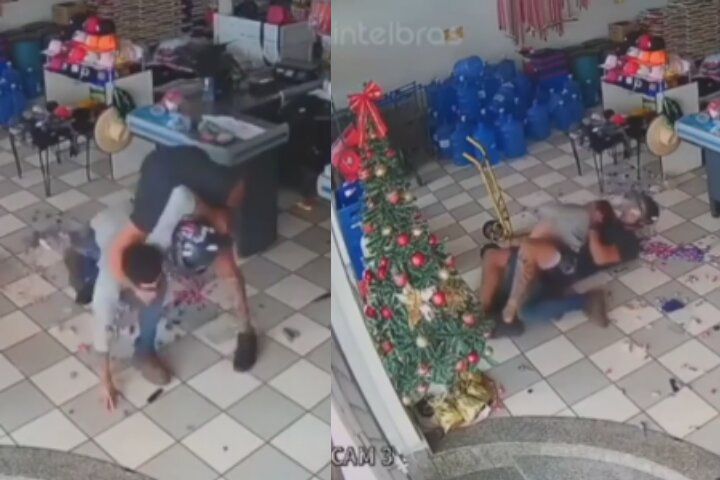 A lot of Brazilian Jiu-Jitsu practitioners start training because they want to learn how to defend themselves. The sport aspect of the Gentle Art doesn’t start interesting them until much later. After they start feeling comfortable in being able to hold their own against people who don’t train.
But even then, even after you learn how to defend yourself… You shouldn’t go head-first into unpleasant situations. As the saying goes – most of the time, playing heroes isn’t a good idea.

This is what, seemingly, the “Helmet Guy” from the video below understands well. At the moment when an armed robber enters the store, he takes his things and heads out. He doesn’t want to risk his life, and rightfully so. But then, something happens.
The store employee which is being threatened takes the robber’s hand (the one wielding the weapon) – and the Helmet Guy jumps in to help.

He leaps in with a number of well-delivered strikes first and then tries to throw the robber with a Judo-style technique. When that doesn’t go according to plan, he goes behind the robber’s back and takes him down from there.
Then, with a Knee On Belly, he punches the opponent multiple times, before going behind him. The robber turns into him however – and then the Helmet Guy pulls him back, inserts hooks, and what seems to be a deep Rear Naked Choke.

It’s safe to say: not all heroes wear a gi. But what could the Helmet Guy have done better? While the Gracie Breakdown is still to take place, one of the things he could’ve done is keeping the robber stomach-down, not letting him turn into him in the first place.
Plus, if you care about your training partners, please don’t take their back like the hero from the video above did… By pulling them over their knees. The robber deserved it, your friends don’t.