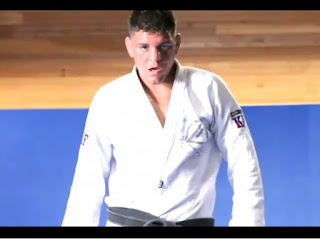 Braulio Estima, one of the best Jiu-Jitsu players in the world, will welcome Nick Diaz back to the world of BJJ.

The Diaz vs. Estima BJJ superfight, which will be contested at 180 pounds, will take place at the World Jiu-Jitsu Expo on May 12 in Long Beach, Calif., according to WJJE officials.

The 31-year-old Estima has won a plethora of BJJ competitions over the past decade. He most recently defeated Ronaldo “Jacare” Souza in a super-fight at the 2011 edition of the prestigious Abu Dhabi Combat Club Submission Wrestling Championship and won gold medals at the 2009 ADCC tournament in the 88kg and Absolute divisions. He is currently training with Blackzilians in South Florida in preparation for his MMA debut later this year.

Diaz, a black belt under Cesar Gracie, hasn’t competed in a BJJ match in two years. He has never been submitted in BJJ competition.
Diaz hasn’t fought since his loss to Carlos Condit at UFC 143 in February. According to his manager Cesar Gracie, he is still waiting to find out when his Nevada State Athletic Commission hearing will take place after he tested positive for marijuana metabolites following the fight.

For more on the Expo visit the WJJE official Web site