Nicholas Meregali Publishes Statement on IBJJF Worlds DQ: “I Was Punished Too Much” 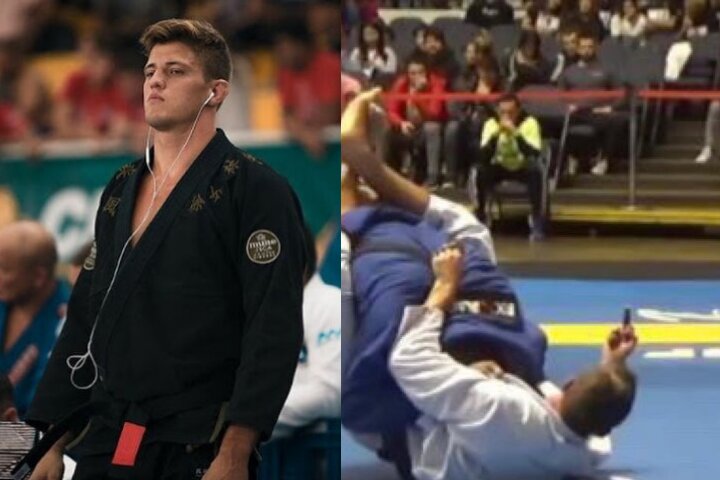 The absolute final match of the 2021 IBJJF Worlds between Felipe Pena and Nicholas Meregali, though eagerly expected, did not happen. Namely, Meregali was disqualified from an earlier ultra-heavyweight semifinal match, when he showed a middle finger to the audience.
You can watch the incident on the video below:

Now, Nicholas Meregali has decided to released a statement, describing his actions and why he believes that he was punished too harshly:

1. Guys, I had the wrong attitude in a moment of absurd adrenaline that overshadowed the shine of the Worlds and in the end I was punished and we were all harmed.

2. I understand the rule and I am aware that I must always follow it.

3. I didn’t offend my opponent, nor the crowd, nor the event; I offended a guy who was insulting me repeatedly and offensively.

4. I accept the decision, I know it won’t change, but I believe I was punished too much.

5. If the Federation has this rigor to punish athletes, it must also protect the athletes, providing security against offenders and this type of uncivilized crowd. This does not add to the spectacle.

6. I don’t think it was appropriate that the team leaders participated in the decision to disqualify me, it wasn’t an impartial decision as it should be, as there were several people with personal interests in the discussion. Unfortunately, nothing I can say will change what happened.

7. I apologize to you Max Gimenes, you were very harmed by all this; you should have been elected World Champion right after the disqualification. If I was disqualified after the fight I won, the athlete who lost to me didn’t deserve the victory and one more chance in the championship.

8. I want to apologize directly to you Felipe [Pena]. I really admired your attitude of having defended me and of having tried everything to make your absolute final with me. Sorry for my attitude, for taking your last fight out of your hands.

9. I apologize to everyone who somehow felt offended or harmed by my act and for this moment.

10. I’m getting back to loving Jiu-Jitsu. I loved seeing the affection and support of many people, and I’ll come back after this sad story is more mature.