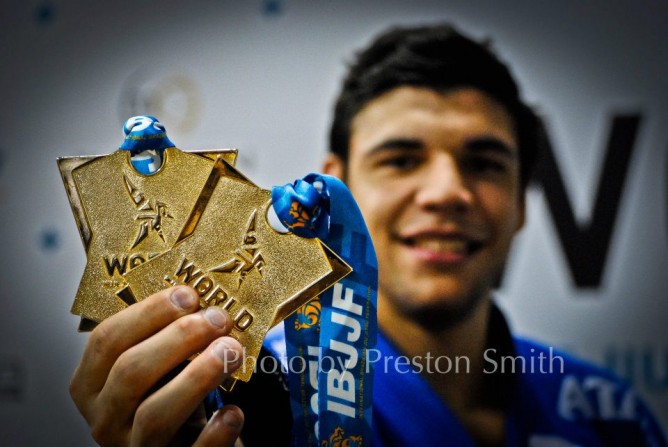 Current brown belt absolute world champion, João Gabriel Rocha received his black belt at the beginning of the year, during the Copa Podio GP where he beat some big names at black belt. The prodigy from Soul Fighters is now preparing to make his debut in the ultimate rank in WPJJC  in Abu Dhabi on the 13th and 14th of April.

About how he feels about debuting at black in Abu Dhabi, Joao is excited since it will be his first time coi peting at this grand event and at black belt too, It will be fun.

About changes in his training regime: “The main change has been with conditioning. I have a personal trainer called Andre Nobrega who is really pushing me. My Jiu-Jitsu training is in the hands of Leandro Escobar. I train in the morning, at noon and night – for a total of six hours of training per day.” Joao said

About competing as a black belt: “At Black belt you have no where to run. So I trained specifically for escaping tricky situations. For example, with a guy passing the guard or on my back. Jiu-Jitsu is about trying to get comfortable in all situations, and that’s what I try to do. I have a lot of guts and will to win my space among the top black belts. I want to do everything I did in the other belts, now is the time to show my value and I will fight hard for it. I don’t promise titles, but I can promise a lot of willingness to win…”