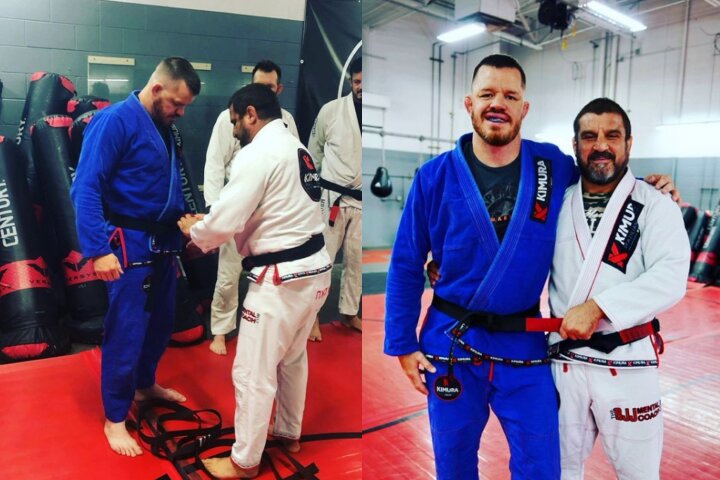 C.B. Dollaway is a mixed martial artist with fights in the UFC and Rizin championship alike. He has a 17-10 professional MMA record and, although his last fight has been on December 31, 2019, his skills keep improving. What’s more, he earned his Brazilian Jiu-Jitsu black belt a few days ago!

Dollaway had originally trained wrestling and made his way from there as a high school talent, ultimately beginning his professional MMA career in 2006. During his career, he had three submission victories; against Ed Herman, Jason Miller and Jay Silva.
When it comes to Jiu-Jitsu, Dollaway has accrued a lot of experience as well – having been training for over 15 years! Now, his new belt was tied by Master Jair Lourenco Gurgel, who is a pupil of the great Andre Pederneiras.

He shared the good news on social media:

After 15 years in the sport of mma today I was awarded my Blackbelt in bjj from @jairlourencokimura. I have had a few coaches along the way @kikofrancebjj @maracaba_bjj @carlosfariasbjj @triboletbeau and want to thank them for the time they invested in me as well. The last four years with @jairlourencokimura as our head coach I have been able to see what martial arts were all about. Not only is Jair a tremendous coach, but more importantly he is an outstanding human being. He is one of the most big hearted, respectful, & loyal people I have had the pleasure of training with in my lifetime! Definitely look forward to many more years of training together coach. 🙏

It was awesome to see my teammate and friend @ryanbader receive his black belt today as well! Also to have so many people that I have had the privilege of training with over the years stop by the gym today made it even better.