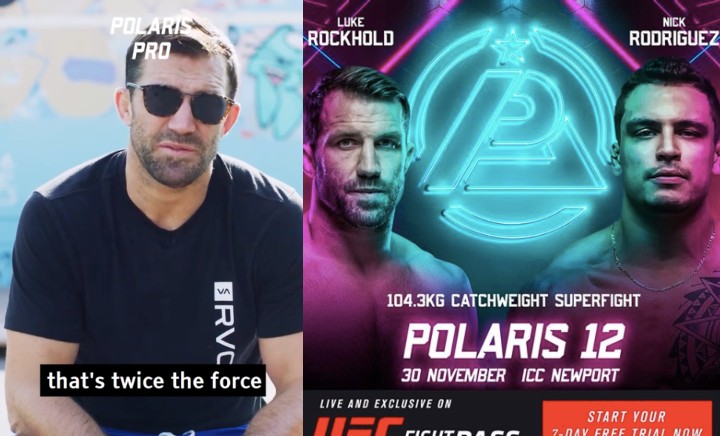 Former UFC middleweight champion Luke Rockhold will be facing the 2019 ADCC silver medalist Nick Rodriguez in a grappling superfight at the upcoming Polaris on Nov. 30 event in Newport, Wales. You can book tickets here.

Rockhold was recently interviewed by Submission Radio and was asked about the Nick Rodriguez grappling match.

Rockhold said that he found the current BJJ scene strange and that he doesn’t understand the trend of grapplers guard pulling and hunting for leglocks:

Bjj is somewhat suspect these days and you know I’ll have some fun with this kid Nick. I haven’t seen too much of him really. He fared well for himself pretty well, took second at ADCC and I’ve done a little homework he seems to bully guys around with his wrestling and this is like decent high school wrestling which doesn’t mean too much when it comes to me. I wrestle with the big boys so I mean he’s a he’s a good wrestler for Jiu Jitsu. I think you’ll find that I’ll be able to push him there I’ll be able to get takedowns if I need them. Then when it comes to the grappling you know, I’m a physical guy and a lot of these guys aren’t physical and I can match them in so many ways there so I’m excited that he’s a he’s not one of those stupid leglock guys that just butt scoots.

This whole this whole modern-day jujitsu thing kind of pisses me off. mm-hmm it’s pretty stupid all the sport jiu-jitsu where the guys just all leg lock-based when they just compromise themselves trying to get these foot locks and so it’s nice to have a guy that’s can actually bring it…

Rodriguez is looking forward to the match: