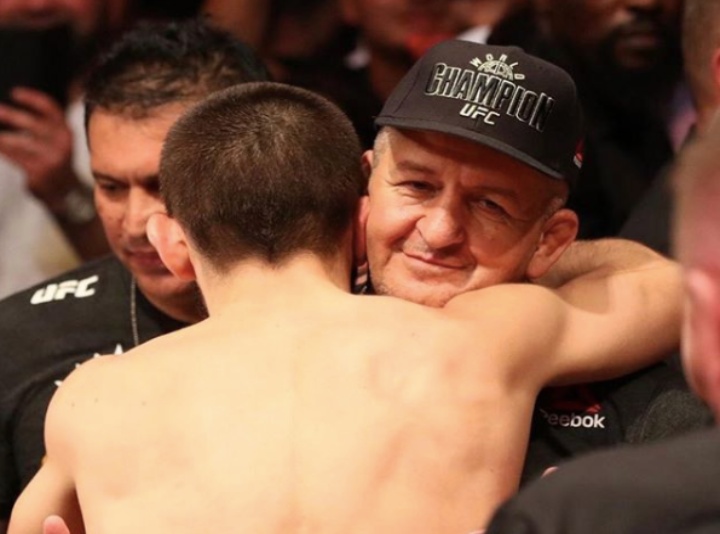 Khabib Nurmagomedov’s father and coach Abdulmanap passed away earlier this month in a Moscow hospital after complications from the corona virus at the age of 57. The Mirror first reported.

Khabib didn’t make any statement about his father until toay on his Instagram account. The deeply religious Khabib quoted the Quran, and wrote the text in English, Arabic and Russian:

“Quran 17:23-24.
And your Lord has decreed that you not worship except Him, and to parents, good treatment. Whether one or both of them reach old age [while] with you, say not to them [so much as], “uff,” and do not repel them but speak to them a noble word.
And lower to them the wing of humility out of mercy and say, “My Lord, have mercy upon them as they brought me up [when I was] small.”

“You will be missed father, you were father, friend, brother and coach in one person. You taught me almost everything I know, I hope that you were happy with me. The contentment of parents is the contentment of Allah,” the final statement read (via Google Translate).

Khabib Nurmagomedov’s close friend and teammate Daniel Cormier feels uncertain about “The Eagle’s” fighting career after the death of his father.

Speaking to ESPN’s Ariel Helwani, Cormier talked about a conversation he had with Khabib a few days before Abdulmanap:

“I talked to the champ — my champion, our champion, AKA’s champion — on Wednesday about everything, and he was having difficulties dealing with all this. The training makes him feel better, but it would be very difficult for the champ to fight under those circumstances.”

Khabib is set to have his third title defense against interim champion Justin Gaethje in September.