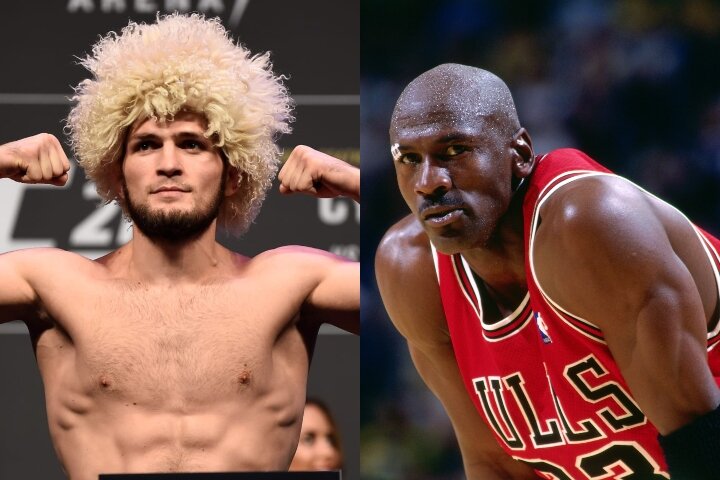 Khabib Nurmagomedov has met a lot of famous people; all the way from Cristiano Ronaldo to the Russia president Vladimir Putin. However, there are still people he’d wish to have had an opportunity to meet, such as Muhammad Ali.
But, other than Ali (who passed away in 2016), Khabib also wants to meet… The one and only… Michael Jordan!

In a recent episode of the “Full Send Podcast”, Khabib explained that he watched “The Last Dance” documentary which left him inspired about Jordan, the basketball legend:

Michael Jordan, a month ago I watched his documentary because I’m working on my documentary and it was very interesting to watch. My friend advised me: “You have to watch this. It’s very impressive.”
Before his documentary, I didn’t know about him much. I just knew Michael Jordan is the greatest basketball player, and that’s it. In Dagestan, we don’t follow the NBA much and it was very impressive for me to watch, and I really want to meet this guy.

Nurmagomedov actually does play basketball himself – but a Dagestani version of it. It’s a mix between rugby and basketball, with tackles and no dribbling the ball, only passing it and shooting it:

I really want to meet Michael Jordan. I play basketball, but not like [him]. This is Dagestan basketball: we wrestle, we run, we do everything.