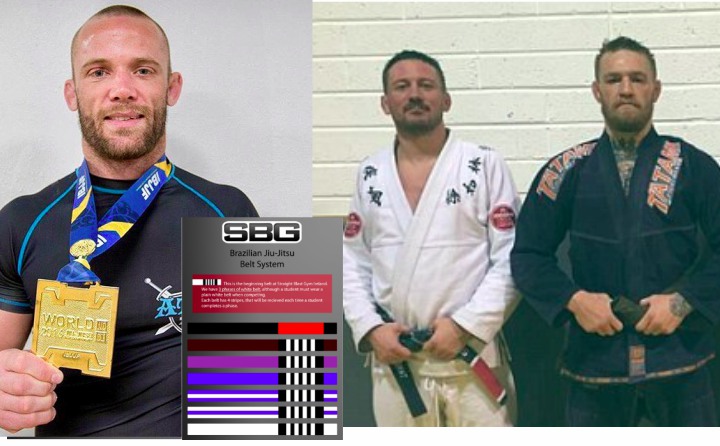 The outspoken 2017 No Gi world champion Josh Hinger has recentlty criticised the belt system used a SBG academy in Ireland, which happens to be Conor McGregor’s BJJ gym. He called it a MCdojo. McGregor has received all his BJJ belts including his brown belt from Kavanagh.

What exactly is a McDojo you may ask?  It’s basically a martial arts school or franchise of schools that have shady and poor instructors, that are only focused on making money and that make false claims. Most schools are run as businesses but a MCDojo’s sole function is to make money.

Hinger has a problem with the fact that the SBG academy, which is lead by Ireland’s first BJJ black belt John Kavanagh, has added two unique belts between white and blue:

This is some serious McDojo bullcr*p. Does anyone think this is okay? I wonder if there is a $150 “belt test fee” that goes along with each of those imaginary belts.
So for all the people who said “it’s smart for business.” Isn’t that EXACTLY what a McDojo is? Someone who manipulates industry standards in order to make themselves some extra cash? That’s what a McDojo is. Isn’t one of the great tenants of martial arts to have patience, perseverance, dedication??? Maybe students need to learn patience and dedication before they can have any kind of belt promotion. Maybe teaching these values to your students should be a priority. Not giving them “halfway belts” that are generally reserved for children. “It’s good for business” is the dumbest excuse I have heard to defend this. Every tournament in the world recognizes white, blue, purple, brown, and black as categories. So an adult with a green belt or a white/blue combo belt is supposed to compete where?!? They better not be sandbagging in the white belt division. They aren’t white belts. So which division do they compete in?

This practice is similar to the system used by American Top Team, Robson Moura and Ribeiro Jiu-Jitsu which awards green belts to adults as a rank between the white and blue belts.

Although Hinger cut out the gym’s name, it appears that he was referring to the SBG gym. As seen on their website: 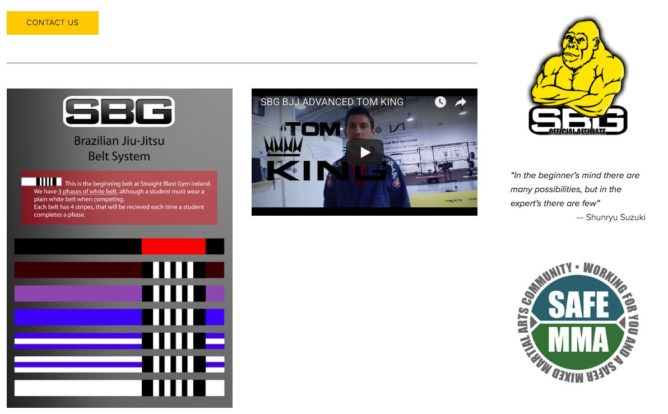 In BJJ, few published guidelines or standards determine when a practitioner is ready for promotion; the criterion is generally determined by individual instructors and/or academies.

20 Warning Signs Of A BJJ McDojo

There are actual 6 distinct belt systems used in BJJ and each one is different:

Hinger recently criticised BJJ coaches that don’t allow their students to crosstrain at other gyms:

Josh Hinger on No Cross Training Rule: ‘Is Being Treated Like a Dog Ok?’